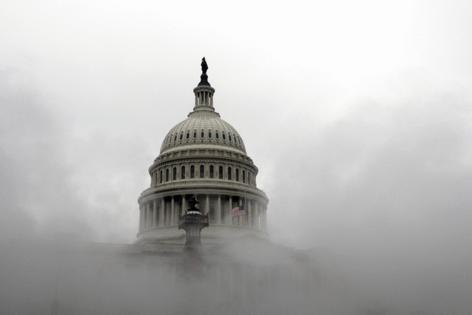 WASHINGTON — Democrats have a brief respite to try to raise the debt limit before the Treasury Department runs out of borrowing authority as early as December. But the path forward is littered with procedural questions and political obstacles.

Senate Republicans are insisting Democrats raise the debt ceiling without GOP help by using the filibuster-proof reconciliation process. Democrats have largely rejected that option, which Senate Majority Leader Charles E. Schumer says would be a “drawn-out, convoluted and risky” endeavor, though Speaker Nancy Pelosi on CNN’s “State of the Union” on Sunday acknowledged that reconciliation is “one path,” but not the preferred one.

And, according to budget experts, reconciliation procedures appear to require lawmakers to vote for a specific debt limit amount, at least during the initial phase. That’s a potential political problem for Democrats’ preferred approach of taking the debt ceiling off the table until after the 2022 midterms, which could require raising the limit by something like $2 trillion — topping $30 trillion for the first time.

Another option bandied about before Schumer and Minority Leader Mitch McConnell, settled on a short-term patch raising the debt limit by $480 billion earlier this month was a “waiver” from the Senate’s filibuster rules. Sen. Joe Manchin III, D-W.Va., nixed that idea, but some say it could win over even the most ardent critics if the U.S. Treasury once again faces default.

“I think you’ll see an awful lot of Democrats being ready to say, ‘Not me, I’m not doing that again. We’re going to end the filibuster,’” President Joe Biden said during a CNN town hall Thursday night.

Alternatively, Democrats could try to convince 10 Senate Republicans to vote for another series of short-term increases if necessary. “Republicans just showed us they are capable of allowing a Democrat-only majority threshold vote to happen through regular order,” said a former Democratic aide who requested anonymity to speak candidly. “There’s no reason we can’t do that again.”

Republicans say that’s not an option. McConnell wrote to Biden on Oct. 8, “I will not provide such assistance again if your all-Democrat government drifts into another avoidable crisis.” Alabama Sen. Richard C. Shelby, one of 11 Republicans who voted to proceed to the short-term bill, said last week he wouldn’t do so again, “and I don’t think any of us would.”

Some conservatives criticized McConnell for relenting on the short-term patch. But a former GOP aide said that bill prolonged the debt limit as an issue for Democrats. The former aide, who spoke on condition of anonymity, believes McConnell’s objective has been to “make sure Democrats own the [debt limit] number” and slow down their legislative agenda.

Barring a GOP change of heart or a change in the filibuster rules, reconciliation appears to be the most obvious, yet tortuous, path — and one that could eat up valuable floor time.