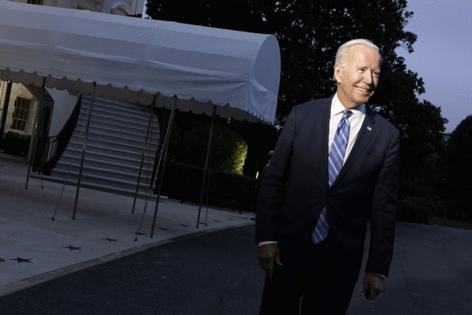 WASHINGTON — As former President Donald Trump maintains his grip on the Republican Party and further spreads conspiracies about the 2020 election, some Democrats and progressive activists are urging President Joe Biden to speak out more forcefully against his predecessor.

During his first nine months in office, Biden has largely avoided attacking Trump by name, even as he has broadly criticized those sowing doubt about the electoral process and pushed for measures to safeguard voting rights.

Some Democrats agree with Biden’s posture, arguing that he should not provide oxygen to Trump and his baseless claims of election fraud when he is no longer in power. But others in the party say Biden should be more focused on combating efforts they see as undermining democracy, especially as Trump ramps up his political activity ahead of the 2022 and 2024 elections.

“The Jan. 6 insurrection was the DEFCON 1 moment for the Biden administration and for American democracy,” Democratic strategist and pollster Fernand Amandi said. “And by not elevating that to the most important focus of the country in the administration today — which is the efforts by the Republican Party and President Trump and Trumpism to end American democracy — we dilute and diminish the very existential nature of what that threat represents.”

Since leaving office, Trump has sought to assert his control over the GOP. He has held rallies around the country, worked to defeat Republican lawmakers who voted for his impeachment and has left the door open to another presidential bid in 2024.

Some Democrats say Trump’s continued presence on the national stage has made it more urgent for Biden to take a harder line against him and his ideology.

“There is no 2024, if we lose the Congress in 2022,” Amandi said. “You cannot trust Republicans to be good actors to protect democracy.”

“If Joe Biden thinks that he can wake up in 2023 and run the same election as last time and that things will turn out the same, he’s not paying enough attention to the facts that are changing on the ground, where if the exact same election were held in 2024, with the exact same attempts to overturn it, the people who stood up and protected us will no longer be there with them,” said Ian Bassin, co-founder and executive director of the nonprofit group Protect Democracy.

In recent weeks, Biden has signaled a willingness to more vigorously counter the activity of Trump and his supporters on legal and constitutional issues. During a CNN town hall last Thursday, Biden said he is open to changing the rules of the U.S. Senate to allow federal voting legislation to pass by a simple majority.

Biden waived executive privilege this month for a set of records pertaining to the Jan. 6 riot that a congressional committee had sought, and he encouraged the Department of Justice to prosecute a Trump associate attempting to skirt a subpoena issued by the committee.

White House press secretary Jen Psaki told reporters recently that Biden took the unusual step of declining to assert privilege on the documents because Trump “abused the office of the presidency in attempt to subvert a peaceful transfer of power,” actions which she said “represented a unique and existential threat to our democracy that we don’t feel can be swept under the rug.”

But the White House has declined at other points to respond directly to Trump’s attacks and false information. After a rally this month where Trump told his supporters the election “was rigged” and repeatedly criticized Biden, Psaki told reporters the president would spend his time and energy on leading the country and bringing people together.

“The president’s focus is on working to deliver for the American people. He didn’t watch the rally, I can assure you of that. I’m not sure he’s even seen clips of the rally,” Psaki said.

Bassin said that while it is “reasonable” for the White House not to engage in a daily sparring match with Trump, it is a “dangerous dereliction” not to bring the full force of the presidency to bear on insurrectionists.

He said the DOJ should pursue criminal charges against former Trump adviser Steve Bannon, who says he is protected by executive privilege even though he did not work at the White House at the time of the riots, and prosecute anyone who was part of the Capitol attack.

The White House declined to comment for this story.

Traditionally, presidents have allowed the DOJ to operate independently. They have also mostly refrained from assailing their predecessors while in office. But some Democrats say that Trump’s unfounded accusations are so troubling that it requires a more direct response from Biden.

Rahna Epting, executive director of the progressive group MoveOn, said Biden should be delivering speeches, including a primetime address, and holding rallies where he focuses on election issues. She said federal voting right legislation would help. “But you also have to be out there aggressively,” she added.

“We want to see President Biden campaign to safeguard our democracy,” Epting said.

Some Democrats also see a political advantage to combating Trump more forcefully. While he is the dominant figure within the Republican Party, he remains unpopular with the broader electorate.

Obama took aim at “lies and conspiracy theories about the last election” at a rally on Saturday for Virginia Democratic gubernatorial nominee Terry McAuliffe, who has framed his race as a referendum on Trumpism. Members of both parties view the Virginia election, set to take place next month, as a barometer of the political environment one year out from the midterm elections.

“We’re at a turning point right now. Both here in America and around the world. And there’s a mood out there. We see it. There’s a politics of meanness and division and conflict, of tribalism and cynicism,” Obama said. “And that’s one path. But the good news is there’s another path, where we pull together, and we solve big problems.”

Biden is scheduled to speak at a rally for McAuliffe on Tuesday. When Biden last campaigned for McAuliffe in July, he criticized his Republican opponent, Glenn Youngkin, as “an acolyte of Donald Trump.”

Paul Begala, the chief strategist on Bill Clinton’s first presidential campaign, said Biden should tap back into the intense voter distaste of Trump that helped him get elected in the first place.

“I wouldn’t lose that thread. It’s not like Trump is off building houses for poor people like Jimmy Carter,” Begala said. “He is trying to undermine a constitutional order in every way he can.”

Sarah Longwell, an anti-Trump Republican strategist who conducts focus groups of voters, said Democrats putting Trump at the center of their campaign pitch will help energize the Democratic base.

“That is a recipe for juicing Democratic turnout,” said Longwell, who co-founded the anti-Trump group Defending Democracy Together. “It’s the one thing that really unifies their coalition, is opposition to Donald Trump.”

But some Democrats argue that Biden should not make Trump and his unfounded election claims a higher priority, saying he needs to continue to focus on addressing the coronavirus pandemic and passing his economic agenda.

“President Biden needs to stay focused where he is, which is helping to solve problems that Americans face in their daily lives,” said Eric Schultz, a senior advisor to Obama. “Democrats were elected to make a difference for people, in both in 2018 and 2020, and that’s why I think the White House is rightfully focused on making progress on all of these fronts.”

Democratic strategist Joel Payne said that Biden benefits politically from Trump staying in the public eye because it reminds Americans why they voted him out of office. But he said Biden using the bully pulpit to get into the mud with Trump could backfire.