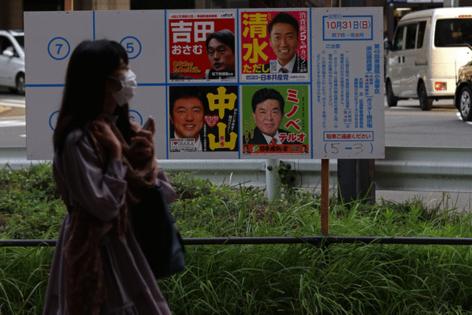 New Japanese Prime Minister Fumio Kishida’s ruling party was dealt a blow when it lost one of two upper house special elections, which are serving as a barometer of support ahead of a national general election in a week.

In a setback to the premier, opposition-backed Shinnosuke Yamazaki was projected by public broadcaster NHK and Kyodo News as the winner in Sunday’s by-election in Shizuoka prefecture, beating the candidate from the ruling Liberal Democratic Party. Kishida had personally campaigned in the race, trying to keep a seat that had previously been held by the party.

The LDP won the other race in western Yamaguchi prefecture, an LDP stronghold, NHK projected.

This was the first election test for Kishida since he took office this month, and it comes ahead of the Oct. 31 general election, where he’s tried to win over voters with pledges to raise incomes, narrow disparities in society, and provide a massive stimulus package to help a Covid-battered economy.

While polling shows the ruling Liberal Democratic Party’s coalition should be able to maintain its majority in the powerful lower house, any major loss of seats in the national vote may hobble Kishida’s young government and increase the chances of him joining a long list of short-serving premiers.

Polling results so far indicate tepid public approval for Kishida, but they also show that the main opposition Constitutional Democratic Party is struggling to attract support, despite an alliance with other small parties. Many voters view the LDP, which has ruled Japan for all but four of the past 66 years, as offering a steadier hand to guide security and economic policies.

The LDP held 276 seats in the 465-seat lower house and its junior coalition partner Komeito held 29. The CDP held 112 and is trying to build its numbers with pledges to raise the minimum wage and increase taxes on high income earners.

Kentucky Congressman Thomas Massie posted his family’s Christmas card on Twitter Saturday. In that photo, all seven family members are brandishing high-powered weapons, including the family patriarch, who is grinning ...Read More

French far-right television pundit Eric Zemmour’s first political rally since declaring his candidacy for president was marred by fighting involving dozens of people within the venue, violence that underlines the ...Read More

France’s Republicans nominated their first woman presidential candidate in a primary that sharpened the focus of the challenge facing Emmanuel Macron in next year’s election.

Valerie Pecresse won the final round of ...Read More