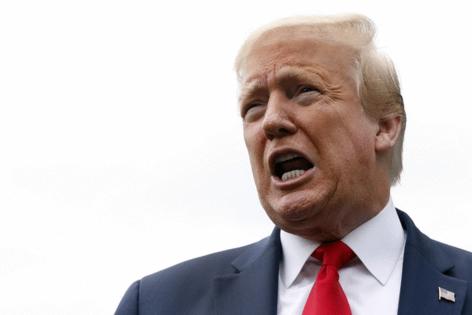 Trump Media & Technology Group merged with a shell company called Digital World Acquisition Corp. (NASDAQ: DWAC) as a way to go public. The transaction this past week valued Trump’s group at an initial $875 million. By Friday, the company’s public valuation had shot up to $1.64 billion.

Reddit day-traders embraced the former president’s new social media venture, many saying they bought the stock as an extension of their political support. Trump Media promised to end “censorship” by mainstream news, and create an on-demand streaming service with “non-woke” entertainment. Trump said his company will compete with Big Tech platforms such as Facebook, Instagram and Twitter, where he was banned.

“YOU ARE SITTING ON A GOLD MINE!!!!,” wrote one poster on Reddit’s website devoted to the stock. “I’m not selling! Twitter banned the president and allowed the Taliban to have an account! This is more than just a stock! This is about your digital freedoms! We’re just getting started!!!”

Another wrote: “For guys who were in GME and AMC, we’ve seen this crap. Hang tight buy the fake dips if you can and ignore the fake manipulation because when the dust settles, the truth will win.”

Among the more traditional investors listed in filings were Saba Capital, run by a well known hedge fund manager Boaz Weinstein. Upon learning of Trump’s affiliation in the merger deal, however, Saba Capital sold nearly all its shares on Thursday, according to the New York Times.

Other investors included Hudson Bay Capital, which is run by Sander Gerber, a big donor to conservative causes and a 1989 graduate of the University of Pennsylvania.

Trump says he plans to start with a social network called Truth Social, but wants to expand into a conglomerate competing with the likes of Disney and CNN.

But is this a good long-term investment?

“This is GameStop all over again,” said Brad Adgate, former Comcast executive and media consultant, based in Cambridge, Mass., referring to the popular “meme” stock that rocketed up and down earlier this year.

Trump’s new company went public by merging with what’s known as a “blank check” company — or special purpose acquisition corporation — and in a few days nearly doubled in value.

These companies surged in number earlier this year often as a get-rich scheme, but they have lagged lately, suggesting that investors will want to see real returns.

But ultimately the share price should depend on the company’s earnings, said Adgate.

“If it’s a subscription-based media company, then we will see. He has name recognition and is leveraging that. Plus he needs money, and is taking advantage of the instant wealth that can be accrued through a SPAC. Plus, he has millions of devoted followers who will do what he asks,” Adgate said. ”But will it sustain this price?”

Still, regulatory filings and a company presentation show there were plenty of questions about the underlying business.

The Securities and Exchange Commission, Wall Street’s financial regulator, exchanged multiple letters with the company in August, asking for clarification on its unaudited financials and negative cash balance. As of March 31, 2021, the company had $25,000 cash and offering costs of $62,500.

That didn’t dissuade one shareholder, who posted on Reddit: “LOL outlets with their “meme” labels. Sorry boys, a social media with no censorship with Trump isn’t a meme, it’s soon to be my retirement.”