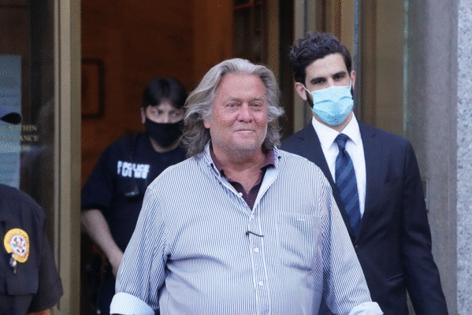 WASHINGTON — The House on Thursday voted 229-202 to hold former White House adviser Stephen Bannon in contempt of Congress for refusing to comply with a subpoena from the select committee investigating the Jan. 6 Capitol attack.

The vote was largely along party lines, but nine Republicans did vote in favor of the resolution, H.Res. 730. They are: Reps. Peter Meijer and Fred Upton, both of Michigan, John Katko of New York, Nancy Mace of South Carolina, Anthony Gonzalez of Ohio, Brian Fitzpatrick of Pennsylvania and Jaime Herrera Beutler of Washington, as well as Jan. 6 select committee Vice Chair Liz Cheney of Wyoming and her colleague on the panel, Adam Kinzinger of Illinois. Indiana GOP Rep. Greg Pence, whose brother, former Vice President Mike Pence faced death threats on Jan. 6, and was with him that day as the Capitol was breached, did not vote.

Only two Republicans — Cheney and Kinzinger — voted in favor of the creation of the Jan. 6 select committee in June. That resolution passed 222-190.

“Madam Speaker, voting on a criminal contempt resolution is not the position we hoped to be in, but Steve Bannon went out of his way to earn this resolution before us and now we must approve it,” Kinzinger said on the House floor.

Select committee Chairman Bennie Thompson, D-Miss., noted Tuesday that Bannon “stands alone in his complete defiance of our subpoena.” Others subpoenaed by the panel have been at a minimum engaging with the panel.

The U.S. attorney’s office in the District of Columbia is now tasked with determining whether to convene a grand jury. Contempt of Congress is a misdemeanor crime that could result in a fine and up to a year in jail.

Bannon is withholding information “critical” to the select committee's investigation, the panel said in its report recommending contempt to the full House, which was unanimously approved 9-0 on Tuesday. It notes that Bannon reportedly spoke to Trump leading up to the insurrection, promulgated the event and said on his Jan. 5 podcast: “All hell is going to break loose tomorrow.”

Bannon, a private citizen who left the White House in 2017, told the committee through his lawyer that he is unable to comply with the subpoena until executive privilege claims by Trump are resolved.

Speaker Nancy Pelosi, D-Calif., told reporters before the vote it is important to the institution that Republicans join Democrats in pursuing charges against Bannon.