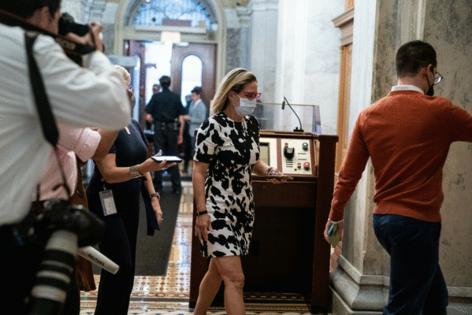 Congressional Democrats are at odds over both the tax and spending sides of a bill to enact the bulk of President Joe Biden’s economic agenda, putting in question the goal of party leaders to strike a deal by the end of the week.

The chances for agreement — which seemed in reach late Tuesday — have receded as Democrats intensified a search for alternatives to the corporate and individual tax hikes they’d worked on for months, in the face of opposition from Senator Kyrsten Sinema of Arizona. Democrats also are reworking the bill’s climate provisions, after Senator Joe Manchin of West Virginia said he can’t support a clean power program favored by Biden, and they are still struggling to come to terms on a host of other provisions.

The eleventh-hour moves to appease the two senators — whose crucial votes are seen as the hardest to win — demonstrate the massive changes that lawmakers must make to the tax and spending plans the White House unveiled in the spring.

“The last couple of days, we’ve come to narrowing what the possibilities are as we see what we need to cover,” House Speaker Nancy Pelosi, who also is facing divisions in her chamber, said Thursday. “But we’ll see what survives, what prevails.”

Should Democrats nix a proposed corporate tax hike to 26.5% from 21%, they would set aside a promise to make the largest businesses shoulder more of the tax burden. It also would leave Democrats with a more than $540 billion hole in the roughly $2 trillion total they need to raise to offset the cost of spending plans that include climate, health care and early-childhood programs.

Besides the wide gulf on revenue, other items that had seemed close to being settled — like the elimination of free community college and the scaling back of the child tax credit expansion to one year — were met with resistance from some Democrats Wednesday.

With slim majorities in both chambers, Democrats need near-unanimous support to squeak the measure through Congress in face of concerted Republican opposition.

Even the skimpiest outline of a deal would need some detail on how Democrats plan to pay for it, particularly given Biden’s pledge that the package would not add to the deficit.

“There is an expansive menu of options for how to finance the president’s plan to ensure our economy delivers for hardworking families, and none of them are off the table,” White House spokesman Andrew Bates said in a statement late Wednesday.

Biden has marshaled a renewed push, both with lawmakers and with the public, to get his agenda enacted. On Tuesday, he met with key lawmakers at the White House, including Manchin and Sinema, and later met separately with one group of progressive lawmakers and a group of moderates.