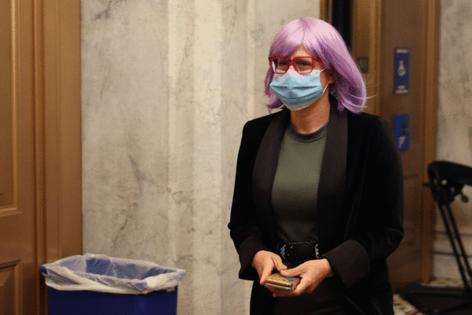 After months of focusing on proposals to increase tax rates on income and capital gains, Democrats are exploring other alternatives to fund President Joe Biden’s social spending expansion, according to people familiar with the discussions.

The White House, in a call with top Democrats Wednesday, floated a billionaires’ wealth tax and a tax on stock buybacks as alternatives to rate increases. A person familiar with the call said that corporate tax increases seemed less likely now than individual income tax increases but that talks remain fluid.

Congressional Democrats and the Treasury Department are considering ways to avoid increasing top-line tax rates, according to the person, who requested anonymity because the discussions are not public. The talks come as Senator Kyrsten Sinema of Arizona, a moderate Democrat, has continued to say she won’t vote for a package with increases on the corporate and individual tax rates, according to one of the people.

Sinema has been largely silent about what policies and financing mechanism she would back for the multi-trillion dollar economic package Democrats are now trying to nail down. Republicans have vowed to oppose the bill, and the Democratic caucus must be united for it to pass in the 50-50 chamber.

Among the options under discussion: increasing Internal Revenue Service audits of the wealthy and strengthening rules for multinational corporations that would bring in more tax dollars without boosting tax rates.

How vital a redo of the revenue-raiser outline that Democrats had sketched out isn’t yet clear.

One Democratic lawmaker, who asked for anonymity to discuss private conversations, didn’t believe that Sinema’s opposition to tax-rate increases was a tenable position, and that she would likely have to retreat some. A separate person familiar with situation said Sinema is continuing to say she opposes increasing the top marginal income and corporate tax rates. The person said that doesn’t necessarily eliminate those as possibilities, but it has forced Senate and House Democrats to look for alternatives.

Spokespeople for Sinema did not immediately respond to an email seeking comment.

Democrats for months have been drafting a bill that would be funded by a series of tax increases on corporations, wealthy households and investors. The House last month proposed to increase the corporate rate to 26.5% from 21% and the top individual rate to 39.6% from 37%, among other tax-code changes to put more of the burden on businesses and the rich.

The rush is on after Senate Majority Leader Chuck Schumer has said he wants an outline of the major elements of the overall bill this week.

Democrats are looking to spend roughly $2 trillion on climate programs, child care and health benefits, and have pledged to fully offset the cost with additional revenue. Lawmakers will likely struggle to fund that much money by relying solely on measures that derived from the existing tax code, the person said.

Democrats have a long list of alternatives that were not included in the House bill, including an annual tax on billionaires on the appreciation of their assets and a tax on corporate stock buybacks. However, it’s unclear if those ideas have enough political support to make it into a measure that needs the votes of all 50 in the Democratic caucus in the Senate and all but few House members.

“I think 39.6% is a reasonable position for high earners,” he said. “I think our 26.5% on the corporate side raises revenue, but at the same time, it’s not punitive.”

Neal said he hoped to speak with Sinema soon to discuss ways to compromise.

Republicans, for their part, see Sinema’s resistance as a chance to blunt the impact of the tax increases that Democrats are pursuing.

“She understands and gets the impact that these tax increases have on businesses,” Senator John Thune, the No. 2 Senate Republican, who says he talks with Sinema regularly, said Tuesday. “I’m glad that some of the things she’s passionate about, in the case of this big tax and spending spree, sync up with the views of some of our members.”

BOWLING GREEN, Ky. — First Lady Jill Biden toured a Bowling Green neighborhood on Friday that was ravaged by a tornado and promised that the town would recover in the months ahead.

“I know it probably felt more like ...Read More

WASHINGTON — Starting Wednesday, Americans can go to a federal website to request delivery of free rapid-COVID-19 tests to their homes, according to the White House.

The launch of covidtests.gov is an attempt to remedy ...Read More

WASHINGTON — John Katko, a former federal prosecutor who was one of 10 House Republicans who voted to impeach former President Donald Trump, announced Friday he will retire later this year.