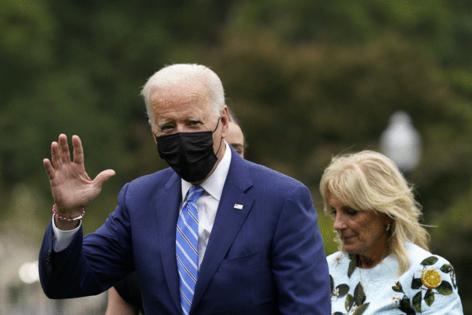 Wait, that seems a little formal. Can we call you Joe? How about “neighbor?” After all those years representing Delaware in the U.S. Senate, we think of you as a near-Marylander. How many times have you been in Baltimore? We’re guessing thousands over the decades, given that it’s a stop on Amtrak between Wilmington, Delaware, and Washington, D.C., and passenger rail is your favored mode of transportation. And so news that you’ve agreed to appear in a CNN Town Hall from Baltimore on Thursday, your first official appearance in Charm City since you got the new White House gig, got us thinking we might be able to pass you this note. Read it now or read it later. We trust you won’t forget the state that gave you a whopping 65.4% of the vote last November. Baltimore voters went 8-to-1 for you, by the way, but who’s counting? We just thought, well, maybe you needed a little reminder.

So we’ll cut to the chase. The COVID-19 pandemic has been tough on Baltimore, and the city was already facing a lot of challenging issues before the outbreak. Concentrated poverty, joblessness (the city’s unemployment rate remains among the state’s highest), housing and health disparities, systemic racism, educational inequities and violent crime with homicides likely to surpass 300 this year — as they have done every year since the death of Freddie Gray in police custody in 2015. We could use a little boost to get us to a better place.

In short: We need opportunities, a serious assist to families that have so much currently stacked against them, so they can have their own piece of the American dream — so they can feel safe in their homes, so they can have access to good employment, live in decent housing and afford to see a doctor every once in a while.

The good news is that you likely want many of the same things. Much of what Baltimore needs can be found in your economic agenda pending in the U.S. Congress. And perhaps “pending” is too optimistic, maybe “trapped” is the better description. While so much attention has been paid to the politics of the bills and the progressive-versus-moderate squabbling within the Democratic ranks, more ought to be focused on the good that these initiatives could do. Infrastructure spending? Baltimore needs greater investment in water and sewer, broadband and public transit. Your Build Back Better proposals to make child care more affordable, to provide paid family leave, to lower prescription drug prices, provide affordable housing and lower overall health care costs hits the spot. So would increasing the federal child tax credit as well as the earned-income tax credit. And so do greater investments in clean energy and workforce training, areas that are connecting people to the jobs of the future.

Republicans sometimes call these proposals a liberal wishlist, but the question is: Why isn’t it everyone’s wish list to have affordable prescription drugs or make preschool within the financial grasp of working class families? Or to expand free school meals or do more to fill the teacher shortage? Sorry, Sens. Joe Manchin and Kyrsten Sinema, such initiatives don’t seem like a waste of tax dollars, they seem more like an overdue effort to bridge the unsustainable gap between this country’s haves and have-nots. And as for the liberals like Sen. Bernie Sanders, please take note: We don’t care whether you get everything on your list or if the total package falls well short of $3.5 trillion. Make a deal. Send help to cities like Baltimore now. We aren’t much interested in the impact on midterm elections or the presidential campaign of 2024. That’s just politics. Native daughter Nancy Pelosi (Institute of Notre Dame Class of 1958) knows what we’re talking about.

We’re realistic. Presidents usually come to Baltimore for a photo op, perhaps to show up at Fort McHenry as Donald Trump did last year or make a speech in a downtown hotel and then be whisked back to the White House. But if you ever get the chance, we think you’d be better served sitting down at a kitchen table at the home of a city teacher or nurse’s aide or secretary or construction laborer and hearing what their lives are like right now, what their finances are like, what challenges they face raising families and just making ends meet. Same with members of Congress. Feel free to invite some along. Get your economic agenda for the working person done, Mr. President, and on the next visit, the coffee is on us.

P.S. Anderson Cooper can buy his own.

Baltimore Sun editorial writers offer opinions and analysis on news and issues relevant to readers. They operate separately from the newsroom.