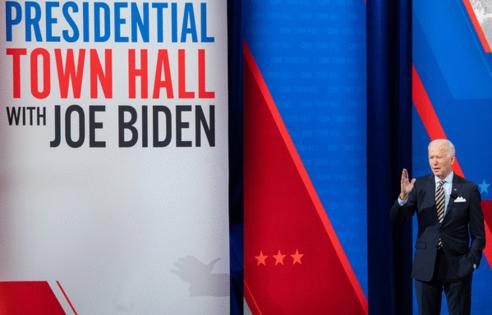 It will be the Democrat’s first visit to Baltimore as chief executive, and comes during a pivotal period in his presidency.

Biden is expected to field questions during the live CNN broadcast, which comes as he seeks to reach agreement with lawmakers on legislative packages on social spending and climate change mitigation, and on infrastructure.

The bills are key pieces of the first-term Democrat’s agenda. Members of his party have split over the scope of the social spending bill.

The White House confirmed the Baltimore visit and said details were to follow, but did not specify when.

Biden was scheduled last March to visit Emergent BioSolutions’ plant in East Baltimore. But he canceled the trip at a time when the company was struggling with COVID-19 vaccine production troubles.

Vice President Kamala Harris toured a mass COVID-19 vaccination site at M&T Bank Stadium in April to mark 100 days after she and Biden were sworn in Jan. 20.

No specific location was given by the White House or the network.

Baltimore City is heavily Democratic and voted overwhelmingly for Biden in the 2020 election. His predecessor, Republican Donald Trump, came to the city a few times, and Republicans used historic Fort McHenry as a backdrop during the Republican National Convention.