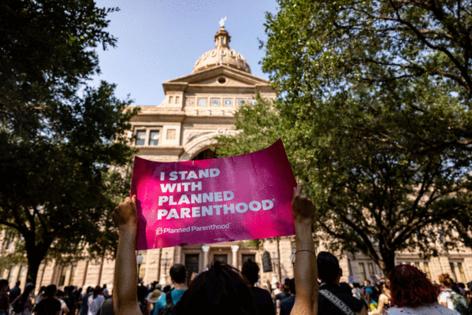 COLORADO SPRINGS, Colo. — Six weeks after a new Texas law blocked most abortions, some women there have driven to Colorado and other neighboring states to receive the procedure, ratcheting up demand for Planned Parenthood services.

In Denver, which has the largest Planned Parenthood clinic in the Rocky Mountain region, there's been a 520% increase in Texas patients seeking abortions since Sept. 1, said Vicki Cowart, regional CEO of the organization.

The average distance people have traveled is 650 miles one-way, she said. Women who can't afford plane tickets and need to return to Texas quickly may not be able to take pain medication after their procedures before through the night to return to work or to their families, she said.

Planned Parenthood of the Rocky Mountains, which covers Colorado, Nevada and New Mexico, has seen demand for services more than double due to demand from Texans, leaders said. While some may travel to clinics in Albuquerque or Las Vegas, many come to Colorado, advocates say.

With wait times increasing, patients are increasingly traveling further north with some heading to to Fort Collins, where Cowart said that clinic has seen a 200% increase in Texas women seeking abortions. The city is a 13-hour one-way drive from Dallas.

Normally, the regional Planned Parenthood system sees about nine Texas patients each week, she said. In the first week of Texas implementing tougher laws against abortion implementation, "we saw 20," Cowart said. The wait time between scheduling and surgery is typically two to three days. Now, it's two weeks.

"We've got about 40 Texas residents who are currently scheduled," she said. Other facilities in Colorado who don't offer the procedure do offer abortion medications. Those places, too, have seen their demand increase, Cowart said, noting the medication must be picked up in person because it can't can't be mailed to Texas

As some Texans look to neighboring states for abortion services, the tighter regulations there remain in amid a looming a legal battle. On Friday, the U.S. Department of Justice said it would ask the Supreme Court to halt the law, a day after an appeals panel allowed the restrictions to remain in place. In a 5-4 decision last month, the Supreme Court declined to issue a preliminary injunction ahead of legal arguments.

Cobalt, which operates a fund to pay for abortions and assist women in travel and accommodations, is planning to increase its annual budget to meet increased need, said Dani Newsum, the organization's director of strategic partnerships. Cobalt and similar funds in the region, like Oklahoma's Roe Fund, have seen a spike in donations since the Texas law went into effect along with a surge in demand.

"During the first weeks of September after Texas Senate Bill 8 went into effect, Cobalt's abortion fund had 35 clients," Newsum said. "Twelve of those were from Texas. … You can multiply that for the clinics in Colorado that people are actually seeking entry to."

Former White House chief of staff Mark Meadows has agreed to testify and provide documents to the congressional committee investigating the Jan. 6 insurrection on the Capitol, a potentially major breakthrough for the panel...Read More