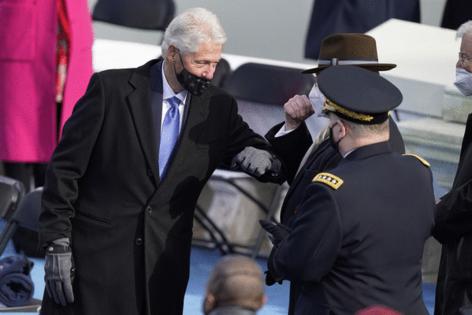 LOS ANGELES — Former President Bill Clinton is expected to be released from an Orange County hospital on Sunday after spending nearly a week there because of an infection, a spokesman said.

“President Clinton has continued to make excellent progress over the last 24 hours. He will remain overnight at UC Irvine Medical Center to continue to receive IV antibiotics before an expected discharge tomorrow,” said spokesman Angel Ureña on Saturday.

Former secretary of State Hillary Clinton and daughter Chelsea Clinton visited the former president at the hospital on Saturday. The trio spent time together, and Clinton also spoke with friends and watched college football, Ureña said.

The 75-year-old former president was visiting friends in Orange County when he felt fatigued on Tuesday and was admitted to the hospital. He was diagnosed with a urological infection, which spread to his blood stream. Clinton is being housed in the intensive care unit as a precaution because of the pandemic, an aide said.

Clinton had a urinary tract infection, a common ailment. But age is a complicating factor, according to the Mayo Clinic, and if not treated properly, such an infection can lead to sepsis, which can cause organ failure.

Ureña said that while the infection had entered Clinton’s bloodstream, he never developed sepsis.