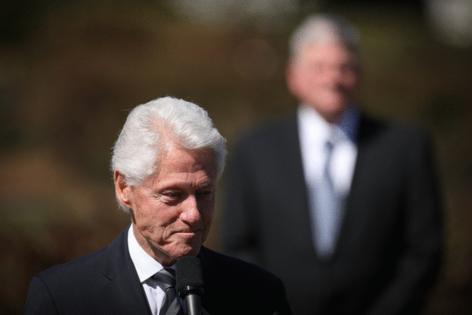 LOS ANGELES — Former President Bill Clinton, hospitalized at an Orange County hospital because of an infection, will remain another night in the intensive care unit to continue intravenous antibiotic treatment, a spokesman said Friday.

“All health indicators are trending in the right direction, including his white blood count which has decreased significantly,” said spokesman Angel Ureña. “President Clinton continues to be in excellent spirits, and is deeply grateful for the outstanding care he is receiving and the well wishes that people have sent from across America and around the world.”

The health scare occurred during Clinton’s first trip to the West Coast since the pandemic hit. The 75-year-old had been visiting friends in Orange County on Tuesday in advance of an event for the nonprofit Clinton Foundation on Thursday when he reported feeling fatigued.

After being admitted to the University of California, Irvine Medical Center in Orange on Tuesday evening, Clinton was diagnosed with a urological infection that turned into a blood infection, an aide said. He is being cared for in the intensive care unit as a precautionary measure to avoid COVID-19 exposure, and spent the day reading, walking, talking to world leaders and interacting with hospital staff.

The former president has been receiving intravenous antibiotics and fluids since Tuesday and had been expected to transition to oral medication on Friday, said another person familiar with the situation.

Former Secretary of State Hillary Clinton flew to California on Thursday and appeared at the foundation event before visiting her husband at the hospital late Thursday, said a person familiar with her schedule. She was also with him on Friday.

It’s unclear when Clinton will be released.

“We hope to have him go home soon,” Drs. Alpesh Amin of UC Irvine and Lisa Bardack from New York said in a joint statement on Thursday, adding that they are consulting with Clinton’s medical team in New York.

Clinton has a history of health troubles: struggles with his weight and high cholesterol, a benign cyst removed from his chest in 1995 and a precancerous lesion removed from his nose the following year.

He underwent successful quadruple coronary bypass surgery in 2004 when an angiogram revealed significant blockage in the major blood vessels leading to his heart.

In 2010, Clinton had chest discomfort that resulted in the insertion of two stents into his arteries. He then adopted a diet that is primarily vegan.

The former Arkansas governor served two terms in the White House from 1993 to 2001.