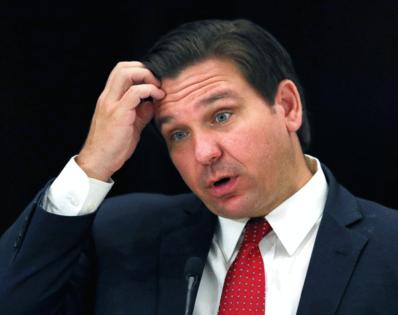 The three districts are overwhelmingly Democratic. The Republican governor’s decision not to order the special elections makes it almost certain there will be three fewer Democratic lawmakers during the 2022 legislative session — and residents will go without representation in Tallahassee as the next state budget is crafted and political power carved up through redistricting.

“This is a nakedly political, shameless move on the part of the governor. And it’s strictly designed to undermine the strength of the Black voters in this state, whenever he can, or however he can, by hook or by crook, pursuant to his aspirations to be the next Donald Trump,” said Don Mizell of Fort Lauderdale, one of the plaintiffs.

Almost half the voters in each of the three districts are Black.

“The fact that he’s willing to abuse his discretion in such a way does not reflect well on his ethics,” Mizell said, adding that DeSantis “is fully aware of what he is doing and the questionable legality — if only because he’s a Harvard-trained lawyer. So am I. I know that he knows better.”

The Mizell name is significant in Broward County history. The plaintiff is a nephew of the late Dr. Von D. Mizell, the first Black surgeon in South Florida, founder of the Broward chapter of the NAACP, and leader of the wade-ins that led to the desegregation of Fort Lauderdale beaches.

Don Mizell, a lawyer and music and entertainment producer, is a former member of the Florida Advisory Committee to the U.S. Commission on Civil Rights.

The case against DeSantis was filed Friday in Leon County Circuit Court by the Harvard Election Law Clinic, on behalf of Mizell and three other Broward and Palm Beach County voters. The Florida attorney is Angelo Marino Jr. of Fort Lauderdale.

The lawsuit asks a judge to compel DeSantis to comply with the portion of Florida law that says the governor “shall” call elections to fill vacancies. “There really is no wiggle room,” said Theresa Lee, the election law clinic’s litigation director.

“If Governor DeSantis refuses to call these elections, the voters are being prohibited from voting,” Lee said. “That just completely strikes at the heart of our system of representative government.”