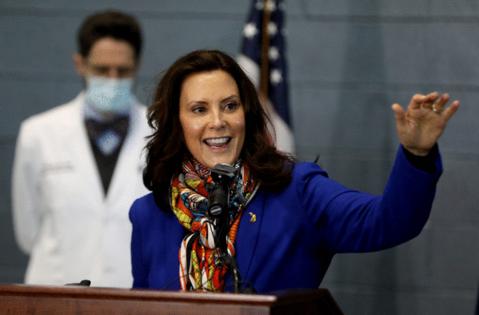 DETROIT — Gov. Gretchen Whitmer vetoed bills Friday that would have established a timeline for the state's elections panel to review initiative petitions and shifted authority for canceling voter registration for people who had died to county clerks.

Both were part of a broad, GOP-led bill package that supporters argued would restore faith in the electoral process. But Whitmer, and many other critics, argued instead the measures perpetuate conspiracies and misinformation in an effort to prevent some people from successfully voting.

"Every citizen of Michigan has the constitutionally guaranteed right to vote and deserves to exercise that right in safe and secure elections. Enrolled Senate Bills 277 and 280 are the latest in a series of election bills arriving on my desk that fail to advance those goals," Whitmer wrote Friday to lawmakers.

"Instead, these bills would divert key resources away from ensuring that every qualified Michigan resident can cast a secure ballot in our elections."

Whitmer provided some specific perspective on why she vetoed SB 277.

The bill shifted responsibility for clearing dead voters from the qualified voter file from city and township clerks to county clerks. County clerks already have the information on those who have died, currently sending this information to local jurisdictions.

Some clerks had argued this shift would be a good change, and the bill passed with widespread bipartisan support in the House and Senate. But Whitmer wrote the measure added "burdensome requirements that would distract from core election administration responsibilities."

Ingham County Clerk Barb Byrum, a former Democratic state lawmaker, testified before in favor of the concept. On Friday, she said she still supports the idea and had not spoken with Whitmer about her veto decision, but trusts the governor.

"Election administrators all across Michigan...work together to administer some of the safest and most secure election," Byrum said.

"I trust the governor to realize and know that the GOP has made election administration a political issue."