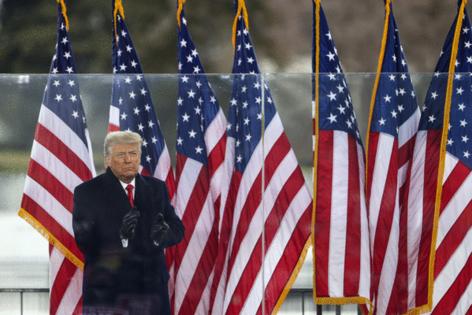 DETROIT — Josephine Brown, whom Metro Detroit Republicans nominated to serve on a key election board in Michigan's largest county, attended the Jan. 6 rally in Washington, D.C., that focused on unproven claims the 2020 vote was "stolen" from Donald Trump.

The gathering eventually spiraled out of control, leading to an insurrection at the U.S. Capitol. Brown said she didn't participate in what happened at the Capitol and traveled to Washington simply to show support for Trump.

But Brown said she "truly believes" Trump won last year's election and she wouldn't have certified the result in Wayne County, a Democratic stronghold that's been at the center for the former president's criticisms.

"If I was on the board of canvassers, knowing what I would have known about that election, I honestly don't think I would have," Brown said. "That's just being honest."

She's the latest example of individuals who have supported unsubstantiated assertions about Michigan's vote being nominated by local GOP officials to serve on county canvassing boards that are in charge of verifying election records and certifying results.

A series of court rulings, dozens of audits and a probe by the Republican-controlled Senate Oversight Committee have upheld Trump's loss in Michigan. Democrat Joe Biden won by 154,000 votes or 3 percentage points.

A Detroit News investigation on Monday revealed a trend across the state involving Republican Party leaders choosing to nominate newcomers to serve on the canvassing boards. The pattern is concerning Democrats and some experts who believe hardcore Trump supporters might refuse to certify future tallies if they gain spots on the panels.

In Wayne County, the state's largest county, the GOP congressional district chairs declined to renominate Monica Palmer for her position on the board of canvassers. On Nov. 17, Palmer and fellow Republican canvasser William Hartmann initially opposed certifying the results before changing course and signing off on them.

"I think this is clearly an attempt (to ensure) that I don't remain on the board of canvassers because I did eventually certify the election," Palmer said last week.

Among the three Republicans the congressional district chairs nominated to replace Palmer was Brown of Westland, who ran unsuccessfully for the state House in 2020. In an interview Thursday, Brown said she supports transparency and fair elections.