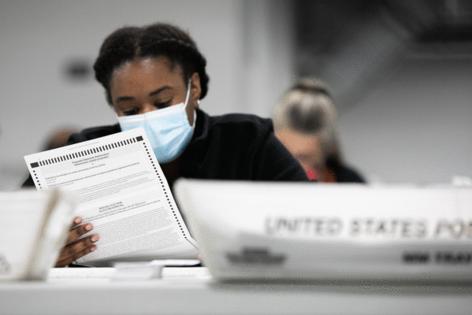 Georgia election investigators were unable to find any counterfeit ballots among batches identified by Republican vote-counters, according to a court brief Tuesday, dealing a blow to a lawsuit seeking to inspect absentee ballots cast in last year’s presidential election.

The court document filed on behalf of Georgia Secretary of State Brad Raffensperger said investigators reviewed 1,000 absentee ballots from batches in Fulton County that allegedly contained “pristine” ballots with perfectly filled-in ovals and no fold lines. All ballots in those batches appeared to be legitimate.

“The secretary’s investigators have not uncovered any absentee ballots that match the descriptions given by affiants or otherwise appear to be fraudulent or counterfeit,” stated the 89-page response to the court by Georgia Assistant Attorney General Charlene McGowan.

The secretary of state’s office provided information about its investigations in response to a request last month from Superior Court Judge Brian Amero, who is considering whether to dismiss the case.

The lawsuit is based on sworn statements by four Republican election auditors who alleged they saw suspicious ballots during a statewide audit that recounted every ballot by hand in November.

The lead plaintiff in the case, Garland Favorito of the group VoterGA, said a full inspection of Fulton County’s 147,000 absentee ballots is needed to find counterfeits.

“Sworn affidavits say there were counterfeit ballots, and we need to know where they are and how they got there so we can fix this for future elections,” Favorito said.

State election officials have said there’s no indication of fraud after three ballot counts and multiple investigations. Democrat Joe Biden defeated Republican incumbent Donald Trump in Georgia’s presidential election by about 12,000 votes. But Trump and his supporters have continued to claim the election was rigged, despite providing no evidence that has stood up in court.

Investigators questioned the four Republicans who worked as auditors and said they saw problematic ballots, but they provided little information to back up their claims.

One of them, Suzi Voyles, said she saw ballots that were not creased and appeared to have been marked by computer rather than by hand. She identified Box 5 and Batches 28-36, but none of the ballots in those batches matched her description, investigators said.