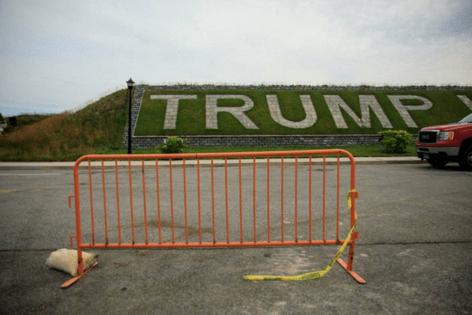 Calling the planned change “so unfair,” Trump accused de Blasio of playing politics by stripping his company of the contract to run the Trump Golf Links at Ferry Point in the South Bronx.

”Mayor de Blasio ... wants to CONFISCATE the project from me for no reason whatsoever, and terminate my long-term arrangement with the city,” Trump wrote in an emailed statement. “De Blasio wants to take it away after all of the work was so successfully done, and so much money was spent.”

Trump accused the mayor of communist-style tactics to punish him.

“This is what happens in Communist Countries, not in America!” Trump said.

A City Hall spokesman did not immediately return a request for comment.

Trump boasts of transforming the golf course at the foot of the Whitestone Bridge from an eyesore into a world-class public course for all New York duffers.

He claims to have poured millions of his own money into the club, including a recently completed $10 million clubhouse.

After the Jan. 6 attack on the U.S. Capitol, de Blasio moved to strip Trump’s name from the city-owned course.

The mayor also yanked the contract from Trump’s company, which had been awarded the right to run the course until 2035.

Trump has already filed a suit seeking to block the move as improper “political retaliation.”

The city initially sought to hand the contract to a company best known as an operator of homeless shelters and provider of services to homeless people. That company recently withdrew its effort to take over the links.

WASHINGTON — A group of bipartisan, bicameral lawmakers is hoping to push a supply chain bill through Congress during the final days of the year.