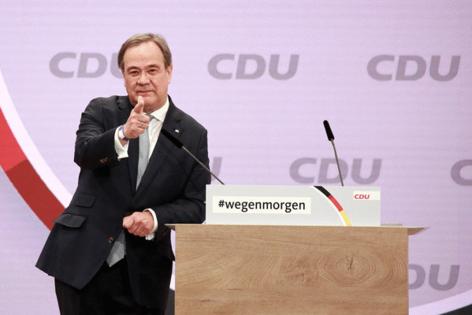 Olaf Scholz’s SPD, the front-runner over the final weeks of the campaign, had 25% of the votes, according to exit polls from broadcaster ARD on Sunday, which gave Merkel’s bloc — led by Christian Democratic boss Armin Laschet — the same result. A second poll by ZDF gave Scholz a narrow advantage of 26% to 24%.

After 16 years under Merkel’s pragmatic centrist leadership, the outcome of the vote will have wide-ranging implications for Europe and the West. The exit polls could prove less reliable than in past years because of the large share of mail-in ballots. Counting will proceed into the night.

If support remains neck-and-neck, neither Scholz nor Laschet have a clear path to the chancellorship, setting up a messy post-election scramble. Both the Social Democrats and the conservatives could claim a mandate and control of the chancellery would be determined by the battle to sign up coalition partners to forge a majority.

The fragmented political landscape means three parties would be needed to secure a majority in the German parliament for the first time in decades.

The Greens, which are the SPD’s favored partner, came in third with ARD projecting 15% — their best-ever results. The party is likely to play a kingmaking-role alongside the pro-business Free Democrats, which got 11% of the votes.

The anti-capitalist Left, on 5%, could also potentially play a role in a coalition with the SPD. The far-right Alternative for Germany got 11% and will take a role in the opposition.

The deadlock underscores the uncertainty facing Europe’s largest economy. Germany’s industrial model is under threat as value shifts away from mechanical engineering, while the country’s exporters risk getting caught up in geopolitical tensions, especially between the U.S. and China.

A new government will need to address the issues Merkel left behind, including aging infrastructure and a lack of investment in digital technologies. The most pressing issue is weaning its auto industry and its energy system off fossil fuels without destabilizing the economy.

Merkel and her current government, including Scholz as finance minister and vice chancellor, will serve until a new regime is sworn in.