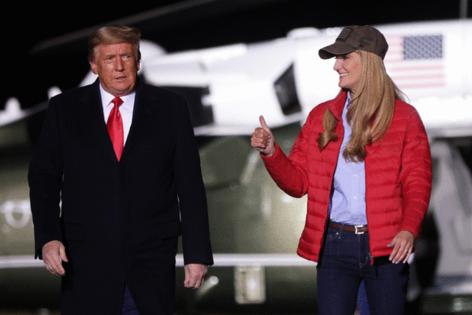 PERRY, Ga. — For the first time since a pre-runoff visit in January, former President Donald Trump is returning to Georgia to hold a rally for thousands of supporters. And even though Democrats swept those Jan. 5 runoffs, Trump is likely to deliver much the same message.

He’s still fixated on attacking Gov. Brian Kemp, Secretary of State Brad Raffensperger and other Republicans who didn’t back his attempt to illegally overturn the presidential election results in Georgia. And he’s still intent on stoking the GOP feud that dominated the party over the past year by relitigating his 2020 defeat.

But there will be other themes at the daylong pro-Trump party Saturday at the Georgia National Fairgrounds in Perry.

For the first time, a pro-Trump slate of candidates for the U.S. Senate, lieutenant governor and secretary of state will share the same stage. There will be a first campaign speech for newly minted Senate contender Herschel Walker. And it seems sure to be another rough day for Kemp.

Here’s what to watch:

The former president likely previewed his attacks on Georgia Republicans with an interview this week on local radio.

“We’ll see who’s going to be running against Kemp, but I would imagine somebody will. If somebody ran, they’d win in the Republican primary,” Trump told host John Fredericks. “But he’s not going to be able to win the general election anyway, because the base isn’t going to show up for him.”

Clearly, Trump’s animus toward Kemp and Raffensperger hasn’t faded. He still blames them for his narrow election defeat in Georgia, even though state election officials have said there’s no indication of fraud after three ballot counts and multiple investigations and court challenges.

The governor and others have tried to change the conversation by pointing to the rewrite of the state’s election law that imposes new obstacles to voting. That was embraced by Kemp and his allies in part to appease angry Trump voters. Even that legislation, though, didn’t go far enough for Trump.

WASHINGTON — A group of bipartisan, bicameral lawmakers is hoping to push a supply chain bill through Congress during the final days of the year.