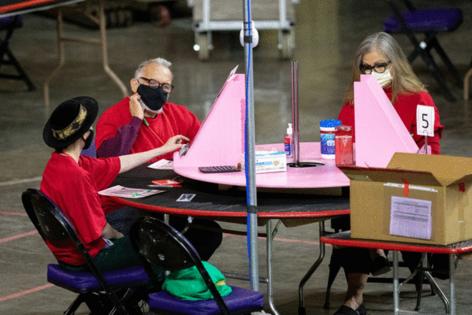 PHILADELPHIA — Pennsylvania now stands to become ground zero in the movement to “audit” the election after former President Donald Trump’s efforts to discredit the 2020 election results failed in Arizona.

A monthslong partisan review in Arizona affirmed President Joe Biden’s victory there, according to findings made public Friday of the so-called “forensic audit” of the election results in Maricopa County, a linchpin county. That review had been widely criticized by experts for failing to follow best practices and was led by a company called Cyber Ninjas that had no previous experience with elections.

Lawmakers in Harrisburg have insisted their “forensic investigation” is different from Arizona’s.

Asked about the results there, state Sen. Cris Dush — the Jefferson County Republican leading the Pennsylvania investigation who traveled to Phoenix in June to tour the facility where the Cyber Ninjas team counted ballots and inspected machines — issued a brief statement Friday night that said: “Protecting the integrity of Pennsylvanians’ election system is not only critical to the overall function of our country, but also secures Pennsylvania’s unique role as a state within the fabric of our nation by allowing Pennsylvanians to express our state’s culture, demographic, and geographic diversity through our voting process. It is for these reasons that Pennsylvania and other states must have certainty in the oversight and integrity of their state’s voting system.”

Trump and his supporters more pointedly attacked the findings and the media reports about it, and suggested the investigation there was incomplete. But election experts said the developments in Arizona should serve as a warning to other states pursuing their own partisan reviews.

“It’s an unfortunate fact that after this abject failure in Arizona, after the embarrassment this biased and untransparent effort brought to the members of the Arizona Senate that pursued it, there are elected leaders in states including Pennsylvania, Wisconsin, and now Texas, who are seeking to import this chaos to their states,” David Becker, founder of the nonprofit Center for Election Innovation & Research, said Friday.

Wisconsin Republicans have undertaken multiple reviews, including one led by a former conservative state Supreme Court justice, and late Thursday the Texas secretary of state’s office announced its own “forensic audit” of four major counties.

Ben Ginsberg, a veteran GOP elections lawyer who served as counsel to George W. Bush and Mitt Romney’s presidential campaigns, said the Arizona review “was a designed process that gave the Trump forces everything they wanted” to investigate the election results.

“That means that if the Cyber Ninja report doesn’t produce solid, smoking gun, irrefutable evidence of a fraudulent election with evidence that stands up to scrutiny, Trump and his allies fail,” Ginsberg told reporters Thursday. “ ... If Trump and his supporters can’t prove it here with the process they designed, then they can’t prove it anywhere.”

Biden won Pennsylvania by more than 80,000 votes, almost double the margin by which Trump carried the state in 2016. Extensive litigation and post-election audits turned up no evidence of widespread fraud.