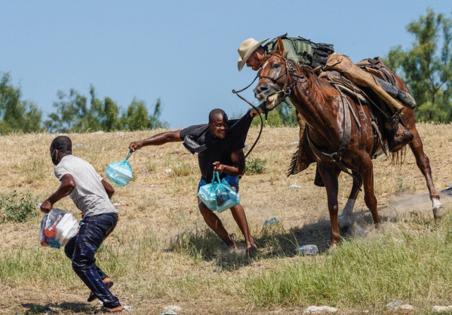 WASHINGTON — President Joe Biden on Friday attempted to simultaneously disavow and accept responsibility for one of the ugliest images of his presidency — desperate Haitian migrants getting wrangled by Border Patrol agents on horseback.

“It’s beyond an embarrassment. ... It’s simply not who we are,” Biden said, promising the agents will “pay” for their actions.

Vice President Kamala Harris echoed that assessment Friday, likening the agents’ tactics to those used “against African Americans during times of slavery.”

Biden and Harris are attempting a difficult political feat: criticizing the actions of their own administration. The problem for Biden and Harris is that the methods used by the Border Patrol agents, though potentially improper, stem at least in part from the administration’s decisions to pursue a policy of deterrence, according to immigration experts and advocates.

“They are distancing from the tactic, but they’re doubling down on the policy,” said Theresa Cardinal Brown, director of immigration and cross-border policy at the Bipartisan Policy Center.

Biden campaigned as a president who would reverse President Donald Trump’s harsh immigration policies and restore what he called a humane system. But like President Barack Obama before him, he has not hesitated to send migrants home, including thousands of Haitians in Del Rio, Texas, fearing the political consequences of appearing too lenient and encouraging even more desperate people to seek refuge in the United States.

But now, Biden has come under greater pressure to erase the memories of Trump.

“Obama had kids in cages. Trump had the separation of kids from their families, and the Biden administration now has Border Patrol on horseback,” Brown said. “And the outcry to all of those made the administrations backtrack, at least on those tactics. But all three administrations relied on deterrence to some level.”

The seemingly intractable problems at the border are just the latest in a recent series of events that have buffeted the White House and contributed to a steady decline in Biden’s approval ratings: The messy withdrawal of U.S. troops in Afghanistan; the resurgence of COVID-19; and the emergence of divisions among Democrats that have held up legislation enacting his agenda.

“The mess at the border is just the latest layer of a multilayered cake,” said William Galston, a Brookings Institution scholar who was a domestic policy adviser to President Bill Clinton. “The problem is that when you are president, not only do you get credit for things that you are not responsible for, you also get blame for things you are not wholly responsible for. Joe Biden is experiencing the downside.”