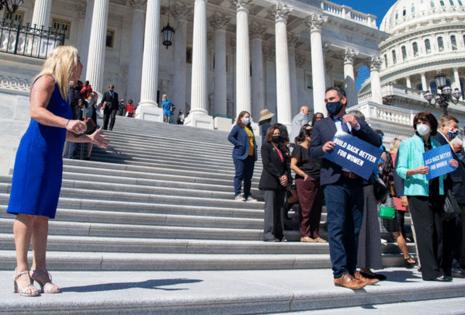 WASHINGTON — Democratic U.S. Rep. Debbie Dingell confronted conservative Rep. Marjorie Taylor Greene on Friday on the steps of the U.S. Capitol, leading to a shouting over political civility — or the lack thereof.

Dingell of Michigan addressed Greene after the Georgia lawmaker was berating a group of Democratic lawmakers about abortion as they held a news conference outside the U.S. House of Representatives about President Joe Biden's agenda.

The exchange was captured on video by multiple reporters at the event.

"You should all be ashamed," Greene shouted at the Democrats.

Dingell called after Greene as she turned to walk away.

"You should be ashamed for your lack of civility," Dingell said.

"Killing a baby up until birth is a lack of civility. It's called murder," Greene retorted. "How about the border down there? Lack of civility. How about lack of laws or protecting our Constitution."

"We have lots of laws we follow," Dingell interjected. "You should practice the basic thing you're taught in church: Respect your neighbor."

"Taught in church? Are you kidding me? Try being a Christian and supporting life," Greene said.

"You try being a Christian and treat your colleagues decently!" Dingell shouted.