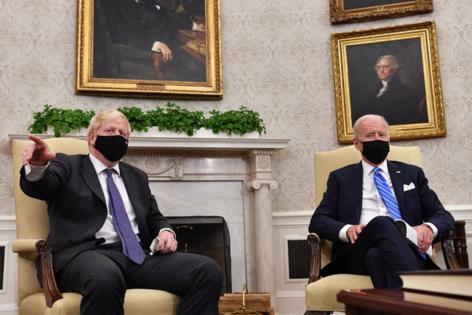 He was fatally slow to respond in the early weeks of the COVID-19 crisis. His former aide, Dominic Cummings, has already offered up a Shakespearean level of vitriol in his revelatory tome about the shortcomings of his boss. There is that fight with the French. Lots of criticism on Afghanistan. Gas bills. Brexit fallout. Cabinet reshuffling chaos.

And there is even the pressing matter as to just how many children have the right to call Johnson dad. Six, Johnson only recently confirmed, as jaws dropped all over Britain.

Plenty of reason, then to hide in the corner. But there was a relaxed Johnson at the White House, looking like he was having a great time in one of his favorite countries, calling on British reporters to ask questions and engaging in the time-honored democratic practice of riposte and retort with the assigned representatives of his bosses, otherwise known as the electorate.

President Joe Biden has problems, too, beginning with the total chaos at the border involving overwhelmed border guards, thousands of impoverished Haitian migrants and an immigration strategy so riven by internal disagreement within the administration that it cannot seem to make a single clear decision about anything.

There’s the fight over COVID-19 booster shots with the fiercely independent Food and Drug Administration advisory panel taking on the White House over who should get boosters; the administration’s reversals and waverings on vaccine mandates and COVID policy in general; looming inflation from, in part, too much federal largesse; and the legacy of the indefensibly chaotic U.S. exit from Afghanistan, not least of which is the Aug. 29 drone strike in that pained nation. Let’s not forget they resulted in the United States killing 10 ordinary citizens, seven of whom were children.

No wonder, then, that Biden was heard to say “good luck,” when Johnson announced his intention to take questions from the media.

Conservatives often say that reporters have treated Biden with kid gloves compared with the prior administration and any rational, nonpartisan thinker can see they have a point. Few East Coast columnists rose up in indignation over the drone killings; had that been on Trump’s watch, newspaper opinion sections would have been ablaze with fury, fingers all pointing in the same direction, toward the White House.

What happened at that august residence Wednesday was not on that level, but still shameful.

Johnson took care of his nation’s media as he should. But when U.S. reporters tried to question their own leader, Biden’s communications team, in this instance better understood as a non-communications team, basically drowned out their own boss and hustled reporters out of the room with all the condescending customer service skills of ambitious Soviet apparatchiks.