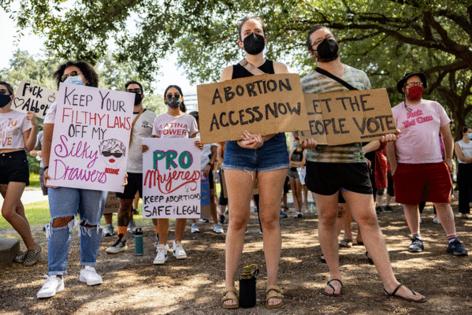 WASHINGTON — Reproductive-rights advocates asked the U.S. Supreme Court to take up an expedited appeal centering on Texas’s new ban on most abortions after about six weeks of pregnancy.

The appeal targets the law’s novel enforcement mechanism, which has stymied efforts to block what critics say is a blatantly unconstitutional law. The measure lets private parties, rather than government officials, sue clinics and people who help facilitate abortions, leaving it unclear how a court could effectively stop the law.

“The Texas legislature has openly defied federal law and has done so in a way purposely designed not only to deprive Texans of their constitutional right to abortion but also to forestall federal judicial protection of that right,” argued the groups, who represent clinics and doctors in the state.

When the Supreme Court voted 5-4 to let the measure take effect earlier this month, it pointed to the enforcement system as a reason for not intervening. The one-paragraph order said that “federal courts enjoy the power to enjoin individuals tasked with enforcing laws, not the laws themselves.”

The groups asked the Supreme Court to put the case on an expedited schedule that would allow for oral arguments in December.

The court is already planning to hear arguments Dec. 1 on a major Mississippi appeal that seeks to overturn the 1973 Roe v. Wade ruling, which legalized abortion nationwide. Mississippi is defending its ban on abortion after 15 weeks of pregnancy.

The new appeal argues that the Texas law is having such a sweeping effect on abortion rights in the state that the Supreme Court shouldn’t wait months or years for the case to wend its way through the judicial system, particularly since lawmakers elsewhere are proposing copycat legislation.

“It is a foundational principle of our federal constitutional system that ‘the federal judiciary is supreme in the exposition of the law of the Constitution,’ and states may not nullify federal rights through ‘evasive schemes’ designed to foreclose federal judicial review,” the abortion-rights groups argued, quoting from a 1958 Supreme Court school desegregation ruling.

Had a state authorized private citizens to sue someone for integrating a school after the 1954 Brown v. Board of Education ruling, “there can be little question that this court would have immediately stopped that act of lawlessness,” contended the groups, led by the Center for Reproductive Rights.

The appeal takes the unusual step of asking the Supreme Court to hear a case without waiting for a federal appeals court to issue a final ruling on the issue.

The lead plaintiff is Whole Woman’s Health, which has four clinics in the state.