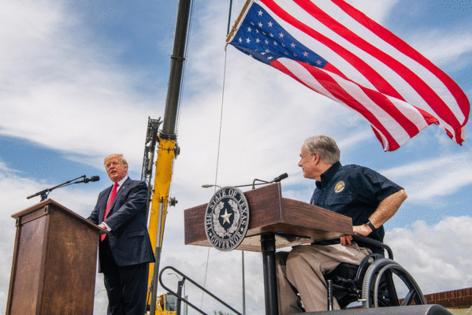 "Despite my big win in Texas, I hear Texans want an election audit!" Trump wrote in a public letter to Abbott. "Texas needs you to act now. Your Third Special Session is the perfect, and maybe last, opportunity to pass this audit bill. Time is running out."

In the final hours of this year's second special session, the Texas Senate approved a bill that would give party officials the power to demand mandatory county-level audits of the 2020 general election. The bill did not get a vote in the House, however, and Abbott did not add the item to the agenda for the third special session, which began Monday.

But Republican state Rep. Steve Toth, of The Woodlands, still filed a bill this session that would allow for such an audit. Trump referenced Toth's bill in his letter and said that the state needs House Bill 16.

"Thankful to have President Trump's support for HB 16," Toth wrote in a tweet.

Trump, who has endorsed Abbott in his primary election contest, won in Texas with 52.1% of the vote to Joe Biden's 46.5%.

The Texas secretary of state's office says that there is "no evidence that any voting or voter registration systems in Texas were compromised before the 2016 Election or in any subsequent elections."

The audit bill would allow state or county leaders of political parties to submit a request to review of the results of the 2020 general election to a county clerk, who would then be responsible for forming an election review advisory committee to review all mail and in-person ballots from randomly selected precincts in the county.

If the audit produces results that differ from the final vote totals for president, congressional seats or any statewide office rate beyond an acceptable margin of error, the committee would then conduct a second review with additional precincts.

If discrepancies are outside the margin of error, the issue would go before the Texas secretary of state's office, which would be required to analyze the results, determine the likely cause of the irregularities and recommend corrective steps for future elections.

During the second special session, Republican Sen. Paul Bettencourt of Houston, author of the bill, said nothing in the legislation allows elections to be overturned. The focus of the bill is on addressing irregularities and identifying fixes.

Opponents raised concerns that the bill would trigger mandatory audits during every future election and create unnecessary strain on county budgets and employees who manage elections.

The bill would trigger mandatory county audits if a candidate, local party leader or political action committee that supported or opposed a ballot measure requests a review.