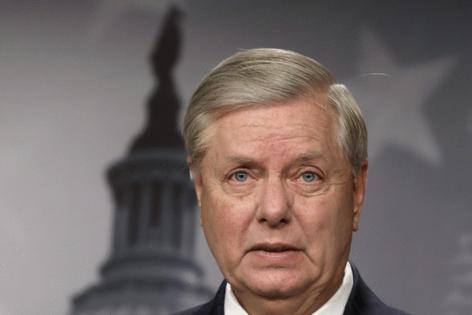 Trump said in a Wednesday statement that he “spent virtually no time” talking to Graham — a Trump ally — about his unfounded claims of widespread fraud plaguing the 2020 presidential election. Trump also denied speaking about the issue with Republican Sen. Mike Lee, of Utah, another point detailed in the book, titled “Peril.”

“Lindsey and Mike should be ashamed of themselves for not putting up the fight necessary to win,” Trump said by way of his Save America political action committee.

At that meeting, the book reports the group talked about evidence that could be in the president’s favor. Graham, the book reported, was unsatisfied with the allegations of voter fraud that were presented and asked Giuliani for something substantial.

The book goes on to detail efforts by Graham to investigate the president’s and Giuliani’s claims.

In the 10 months since the election, Trump’s allegations of widespread voter fraud have never been proven. Investigations into Trump’s claims also have been largely fruitless.

Reports of Graham digging into claims of fraud surfaced right after the election.

Then, the Washington Post reported Graham called Georgia’s Republican Secretary of State Brad Raffensperger and asked about signatures not matching on absentee ballots, among other questions. The call sparked an ethics complaint against Graham.

In a floor speech soon after rioters were forcibly removed from the Capitol, Graham said, “We gotta end it.”

On Jan. 7, Graham held a press conference calling for Trump and his allies to stop pushing claims of election fraud.