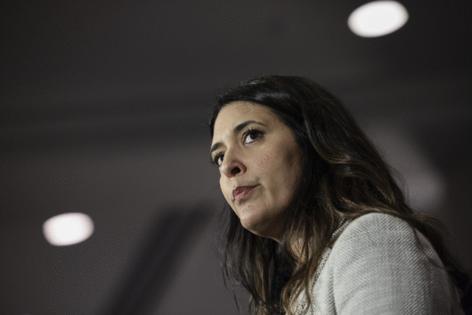 The facility was state-of-the-art, with modern furniture so new it was still encased in plastic and with glass-walled conference rooms where future students would, a guide explained, “learn creative problem-solving through human-centered design.”

Within a few days, forces in the state GOP loyal to former President Donald Trump would attempt to censure the state’s two senators — Republicans James M. Inhofe and James Lankford — for voting to certify the 2020 presidential election won by Joe Biden.

Bice, who unseated Democrat Kendra Horn in the Oklahoma City-anchored 5th District last fall, had not weighed in publicly. Since winning her swing seat, she has shunned the Twitter wars and internal party disputes that have catapulted some of her colleagues in the Republican freshman class to Fox News fame.

Instead, she has favored low-key, sound bite-free appearances like this visit to the vo-tech school, where she assured local education leaders at a follow-up discussion that she was focused on workforce development.

“I am a reasonable, conservative Republican,” Bice said in an interview.

That approach has not spared her from criticism. Even though she has voted in line with House Republicans more than 95% of the time, the state GOP chairman publicly rebuked her for voting in May for an independent commission to investigate the Jan. 6 attack on the Capitol.

Democrats, meanwhile, are not impressed by that vote or other rare breaks with her party, saying Bice is too extreme for the increasingly cosmopolitan region. According to CQ Vote Watch, Bice voted against a majority of her fellow Republicans nine times this year, out of 197 votes tallied through mid-September.

“She has had several opportunities to show what she is really about and what she supports,” said Abby Broyles, a lawyer and former television news anchor running for the Democratic nod to challenge Bice next year. “But she toes the party line.”

Bice’s supporters say redistricting could improve her reelection prospects in 2022, and if Republicans win back the House, her experience as a former state senator and identity as a nuts-and-bolts lawmaker could make her a valuable part of that majority.