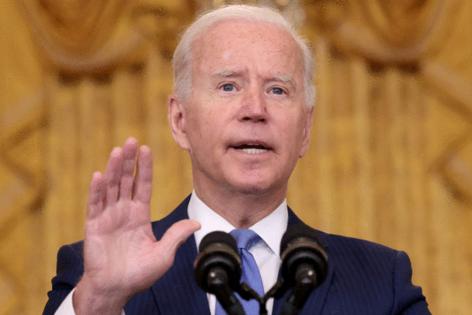 Biden goes before the annual United Nations General Assembly this week on a mission to restore credibility and trust in the U.S. as a reliable global partner following a series of disparate crises from the U.S. withdrawal from Afghanistan, to France and nuclear weapons deals, to COVID-19 vaccinations.

Administration officials insist their partnerships have not suffered permanent damage despite recent setbacks.

"Good friends have disagreements, but that's the nature of friendship and that's — because you're friends, you can have disagreement and continue to work on those areas of cooperation," the United States ambassador to the United Nations, Linda Thomas-Greenfield, told reporters ahead of the start of the General Assembly meeting.

Many U.S. allies cheered the election of Biden as a return to normalcy and traditional alliances after the tumultuous Trump era, when the then-president eschewed international cooperation and promoted an "America First" policy that often translated into America alone.

Biden will address the assembly Tuesday, likely a different dynamic from 2018, when world leaders literally laughed out loud at Trump as he used his speech to brag about his great accomplishments.

But now many of those same allies, dismayed over the chaotic American withdrawal from Afghanistan that abandoned thousands of at-risk Afghans to the new Taliban leadership, as well as other administration missteps or broken promises, are questioning how deep Biden's departure from the Trump administration really is.

Several NATO nations said the U.S. failed to give them proper warning of the hasty, lethal U.S. withdrawal from Afghanistan. The administration says that's not true.

Another blow to U.S. credibility came Friday when the Pentagon acknowledged its last drone-controlled air strike in Kabul, Afghanistan, killed not an Islamic terrorist as first claimed but 10 civilians, including a charity worker employed by a California organization, and seven children.

And in the same week, the Biden administration ignited a huge row with the oldest ally of the United States, France. Biden announced it was sharing sensitive technology to help Australian build nuclear-powered submarines, which scuttled Canberra's $66-billion sub deal with France. It was part of a new defense pact that also included Britain and was widely seen as a fortification against China's rising aggression in the Indo-Pacific region, which Biden hopes to make a strategic priority.