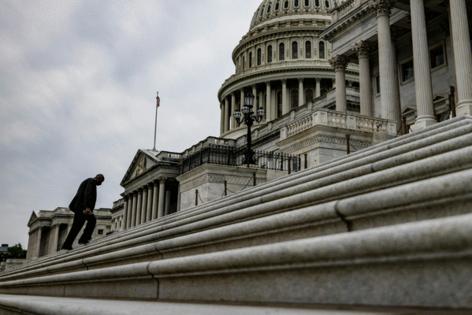 WASHINGTON — A key Senate advisor on Sunday said existing rules will not allow Democrats to include a pathway to citizenship for up to 8 million immigrants as part of their upcoming social safety net bill, a significant setback for Democrats, President Biden and so-called Dreamers, immigrants brought to the U.S. illegally as children.

Democrats are next expected to pitch a back-up plan that would provide a similar pathway to citizenship, but likely not cover as many people, according to sources familiar with the talks. But the ruling released Sunday is an ominous sign for its chances.

Because of the special fast-track procedure Democrats are using to enact their $3.5 trillion bill, all parts must conform to Senate rules, chiefly that each provision be directly related to the federal budget. The process, called reconciliation, allows Democrats to pass their bill with only 50 votes plus the tie-breaking vote of the vice president.

The Senate parliamentarian, Elizabeth MacDonough, advised Senate aides that the proposed pathway to citizenship would not comply, according to a document obtained by the Los Angeles Times on Sunday.

She said the proposed pathway to citizenship is a policy change with implications that far exceed what can be done through this legislative process, which is supposed to deal with issues directly related to the budget and not include major policy changes.

“Changing the law to clear the way to [lawful permanent resident] status is tremendous and enduring policy change that dwarfs its budgetary impact,” she wrote.

The parliamentarian also warned that by allowing Democrats to extend citizenship with only 50 votes, it could later be revoked by the same threshold.

“That would be a stunning development but a logical outgrowth of permitting this proposed change in reconciliation and is further evidence that the policy changes of this proposal far outweigh the budgetary impact scored to it and it is not appropriate for inclusion in reconciliation,” she wrote.

After years of unsuccessful efforts at negotiating comprehensive immigration reform with Republicans, advocates view the Democrats’ “Build Back Better” bill as their best chance of enacting a pathway to citizenship for people who are in the country illegally.

Democrats pitched MacDonough on a proposal that would establish a pathway to citizenship for Dreamers, or participants in the Obama-era Deferred Action for Childhood Arrivals program, and three other groups: certain people with temporary protected status, farmworkers and essential workers.