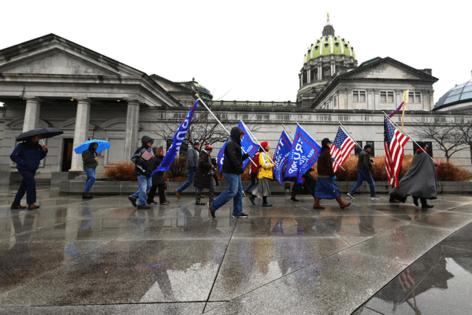 PHILADELPHIA — Democrats in the Pennsylvania Senate sued their Republican colleagues Friday evening to block them from subpoenaing voter records as part of a review of the 2020 election.

The lawsuit argues that the Republican effort unconstitutionally tramples on the separation of powers by stepping on the courts’ power to investigate and rule on election disputes and on the executive branch’s power, given specifically to the state auditor general, to audit how elections are run. The lawsuit also contends that the subpoena violates state election law because it requests voters’ private information, including driver’s license numbers and the last four digits of Social Security numbers.

Senate Democrats “ask this Court to prevent violation of the Pennsylvania Election Code and the Pennsylvania Constitution through (Republican lawmakers’) untimely election contest and to protect the rights of the approximately 6.9 million Pennsylvanians who cast votes in the 2020 General Election, including protection from the unlawful disclosure of their private information” in the state voter database, the suit reads.

The lawsuit was filed by the Senate Democratic Caucus, headed by Democratic Leader Sen. Jay Costa, in Commonwealth Court, the state court that handles government issues. The defendants are GOP Senate President Pro Tempore Jake Corman, the highest-ranking state senator and backer of the election review; GOP Sen. Cris Dush, whom Corman assigned to lead the effort; and Megan Martin, the senate’s secretary-parliamentarian.

In addition to asking the court to block Wednesday’s subpoena, Senate Democrats are attempting to stop the broader election review effort.

Jason Thompson, a spokesperson for Corman and Dush, declined to comment on the lawsuit itself. In a statement Saturday, he pushed back on Democrats’ security concerns around voter information.

“(I)t is disappointing the security issue has been sensationalized by Senate Democrats to the nth degree,” he said. The state legislature works with personal information “all the time ... and we have done so for many, many years without incident.”

He noted that Corman and Dush have said that any third-party contractor given access to private information “will be required to meet the same high standards of information security under penalty of law.”

Friday’s lawsuit was the first court attempt by Democrats to stop what Republican senators call a “forensic investigation” or “forensic audit” of election administration and results. At the federal level, U.S. Rep. Mary Gay Scanlon, a Democrat in a district based in Delaware County, asked Friday for the Department of Justice’s Civil Rights Division to investigate the “authorization of a subpoena of breathtaking scope.”

Scanlon, the vice chair of the Committee on House Administration, wrote in a letter with Rep. Zoe Lofgren, D-Calif., the chair of that committee, that the two of them are concerned about the subpoena and broad election review effort intimidating voters, including potentially deterring people from registering if they believe their personal information will not be protected.