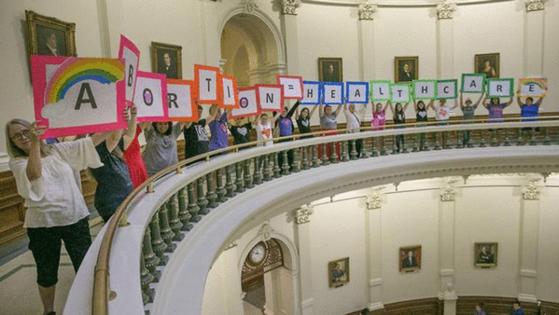 Several applauded, one pumped his fist. Abbott had finalized Senate Bill 8 — a piece of Texas legislation that bans abortions after six weeks of pregnancy and in effect blocks women’s constitutional rights to the procedure established under Roe vs. Wade in 1973.

“Millions of children lose their right to life every year because of abortion,” Abbott said staring into a camera in May. “In Texas, we work to save those lives.”

The ripple effects from that moment — and the law’s creative workaround method that involves using the threat of civil lawsuits against seemingly anyone involved in or aware of any step of an abortion — have reached far beyond the borders of the traditionally red state of Texas. The U.S. Supreme Court on Sept. 1 voted not to block the Texas measure, which went into effect that day and prohibits most abortions.

Now, legal scholars fear that the law in Texas will lead to a rush of similar efforts in other states, prompting local legislators to pursue new measures on gun rights, immigration and other divisive political issues, all in an effort to sidestep the federal government.

From the Deep South to the Upper Midwest, legislators in many conservative states have started to explore how similar laws could be put in place in the months ahead. Some ideas that were percolating before the Texas measure are likely to gain momentum.

“What a law like that in Texas is doing is empowering people to use civil litigation to fight cultural and social grievances,” said David Noll, a law professor at Rutgers University.

Critics of Senate Bill 8, including the Biden administration, which is suing the state of Texas to halt the abortion measure, have assailed it as a clear violation of the Constitution. Roe vs. Wade, which allows abortions until about 24 weeks of pregnancy, remains the law of the land.

In its 5-4 majority decision in the Texas case, the Supreme Court said that it was not ruling on the constitutionality of the state law, but that an emergency attempt to stop it by abortion providers had not succeeded in its challenge. Members in the court’s minority in the ruling called the Texas measure unconstitutional and dissented that it could have been blocked pending appeals.

The new Texas legislation allows individuals to sue abortion providers or anyone who “aids and abets” in the process — a broad category that could include, say, someone who drives a woman to an appointment — for up to $10,000.