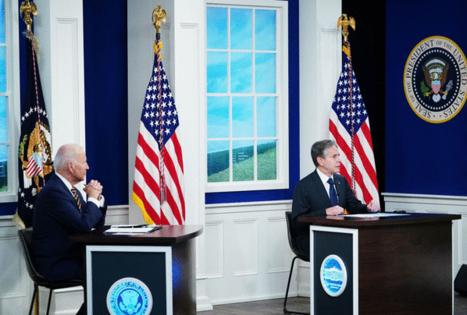 Like the climate summit the White House held earlier this year, this gathering of world leaders was virtual. In his remarks to the Major Economies Forum, the president called on the leaders of countries that are the biggest emitters of greenhouse gases to act with urgency and to join a “global methane pledge.” Brokered by the United States and Europe, the agreement would require countries to cut their methane emissions by at least a third below 2020 levels by the end of this decade.

“Without adequate commitments from every nation in this room, the goal of limiting warming to 1.5 degrees slips through our hands,” Biden said. “And that’s a disaster.”

Scientists established long ago that methane is a potent greenhouse gas, but it has received more scrutiny in recent years as its impact has become better understood. It has 80 times the warming power of carbon dioxide over a 20-year period. But it is comparatively short-lived in the atmosphere, fueling hope that significant reductions would affect the climate quickly.

Other major emitters, including China, Russia and India, had special envoys or Cabinet ministers in attendance.

How many other countries have signed onto the pledge is unclear. Johnson — who formally withdrew Britain from the European Union last year — reportedly has committed to the deal.

“The science tells us we have vanishingly little time left to slow global warming before we permanently alter our environment,” said Sarah Smith, a program director for the Clean Air Task Force, an environmental group. “The fastest way to pump the brakes is to reduce methane pollution, and the newly introduced Global Methane Pledge is a welcome step toward doing just that.”

Oil and gas companies face growing pressure to slash emissions of methane, a main component of natural gas. And more attention is being paid to emissions from coal production, the agricultural sector, large-scale livestock operations and landfills.

In the United States, the first federal regulations controlling methane emissions from oil and gas wells were enacted in 2016. They were eliminated under President Donald Trump but reinstated earlier this year through the use of a somewhat obscure law that allows Congress to repeal regulations enacted in the final weeks of a president’s term.

A recent United Nations climate report on methane highlighted the importance of addressing it in tackling climate change. Published last May, the report called methane reductions one of the most cost-effective strategies to quickly curb global warming. It said that if emissions were cut 45% by 2030, the world could avoid 0.3 degrees Celsius of warming and might prevent about 250,000 deaths from air pollution.

The U.S. and Europe’s new pledge is the first international agreement focused on methane. Its unveiling about six weeks before heads of state gather in Glasgow is intended to build support ahead of the climate summit.

Many countries, including the U.S., are not meeting their greenhouse gas reduction aims. A recent U.N. climate report warned that global action has been so slow that even if nations impose the strictest cuts to atmosphere-warming emissions today, warming is likely within the next two decades to surpass 1.5 degrees Celsius — the more ambitious limit targeted in the 2015 Paris climate agreement.

Biden announced earlier this year that he would double the United States’ original commitment to slashing greenhouse gas emissions, increasing its target to between 50% and 52% by 2030. Whether he’s able to achieve those reductions will depend in large part on the future of a $3.5-trillion spending bill that Democrats hope to pass this fall.