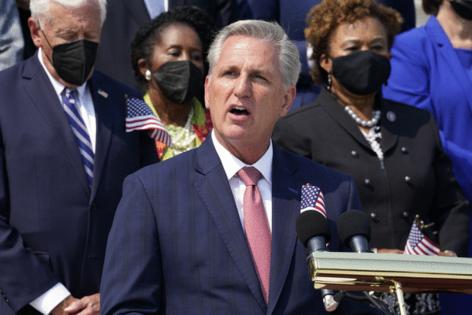 WASHINGTON — Get used to it.

California voters watched the recall election results roll in Tuesday night, determining which governor will lead them for the next year. Those ballots are just a precursor to the next election that will shape the state’s and nation’s future out of Washington, D.C.

The upcoming 2022 midterms have thrown U.S. congressional representatives quickly back into campaign mode. They are counting their money and votes now.

These two incumbents have a fight on their hands. They hold two of the seven California House seats considered by party experts and election observers to be up for grabs.

Also looking at this 2022 election horizon are two other Californians. Speaker Nancy Pelosi will find out whether she keeps her job or cedes it to Minority Leader Kevin McCarthy.

“Midterms are often challenging for the president’s party, and some familiar signs are emerging in favor of Republicans,” said Kyle Kondik, managing editor of Sabato’s Crystal Ball, a nonpartisan analysis group.

All 435 seats in the House of Representatives and 34 seats in the Senate will be contested in the election on Tuesday, Nov. 8, 2022. Primaries to select candidates for those contests are scheduled for June 7 in California.

The consequences could be stark for the nation, as well as California. This will be a referendum on President Joe Biden, whose approval numbers have been falling. It also will be a test for Republicans who have been unfailingly loyal to former President Donald Trump. And it will be the latest national expression of whether people are simply fed up with government, an anger that has surfaced repeatedly in congressional elections over the past 10 years.