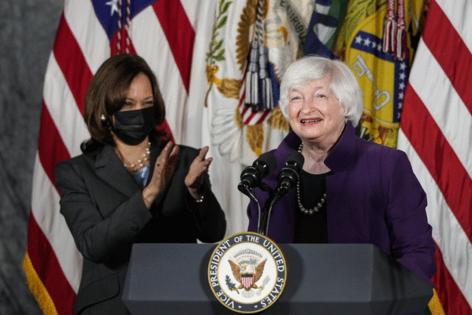 WASHINGTON — Vice President Kamala Harris pressed lawmakers on Wednesday to back legislation that she said would expand access to child care and raise the wages of day care workers, even as her party’s massive spending initiative is facing resistance from key Democrats.

The push from Harris, who joined Treasury Secretary Janet L. Yellen in releasing a Treasury report that made the case for the proposal, came the same day President Joe Biden is reported to have met with a pair of centrist Democrats who have indicated they do not support the overall costs of the party’s $3.5 trillion spending plan.

Without support from those two Democrats — Sens. Joe Manchin III of West Virginia and Kyrsten Sinema of Arizona — the bill is all but certain to fail. The legislation includes historic levels of spending on the child care programs touted by Harris, as well as on health care, education, family services and environmental initiatives. Much of it would be paid for with tax increases on wealthy people and corporations. The White House did not immediately respond to an email inquiring about Biden’s negotiations with the senators.

In her first visit as vice president to the Treasury Department, Harris described the “mass exodus” of women from the job market amid the COVID-19 pandemic as a “national emergency” and said many women have left the workforce to take on child care duties.

This measure is a way to get these women back to work, Harris said. “If we intend to fully recover from the pandemic ... and fully compete on a global scale,” she said, “we must ensure the full participation of women in the workforce.”

Democrats have not fully detailed how they would pay for the $3.5-trillion measure. House Democrats are proposing to pay for the bill in part by raising taxes on individuals earning more than $400,000 a year — and $450,000 for couples — while levying a 3% tax on Americans whose annual adjusted income tops $5 million. They also proposed boosting taxes on big businesses from 21% to 26.5% on annual income of more than $5 million.

Republicans have maintained a unified front against the bill. Senate Minority Leader Mitch McConnell of Kentucky in a Monday statement described the bill as an “effort to move our country to the left forever” and a “reckless taxing and spending spree.” He specifically warned that the legislation would be a “massive new government intrusion into Americans’ childcare arrangements.”

Through subsidies and expanding the child tax credit, which is set to lapse at the end of the tax year, the Democratic legislation would ensure that most families would not spend more than 7% of their income on child care, according to a Treasury report released Wednesday. The average family with at least one child younger than 5 spends about 13% of their income on child care, the report said. If passed, the legislation could save the average family about $15,000 a year in child-care costs, the vice president said.

The spending bill’s child care provisions are politically popular and are not the reason the bill faces an uncertain future. Although Democrats control the House, Speaker Nancy Pelosi of California can lose only three votes, and she is having to navigate difficult politics pitting progressives, many of whom would like to see more robust spending on social programs, against centrists who are concerned about the bill’s price tag.

Democrats have also sought to make the bill filibuster-proof by using a process called reconciliation, which requires a simple majority to pass measures directly tied to the budget — a number Democrats can reach with the help of independents and Harris.

But Sinema and Manchin have balked at the cost. Manchin this month in an op-ed called for a “strategic pause” on the proposal, writing that he would not back a spending bill at that cost and amid rising inflation and growing federal debt. Their meeting with Biden came the same day House committees are expected to complete drafting their bill sections.