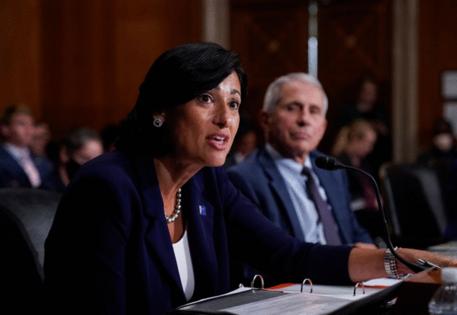 WASHINGTON — The debate over COVID-19 booster shots for all Americans remains intense with less than a week to go before the target rollout date desired by the White House and days before government advisers plan to vote on the issue.

Experts are eagerly parsing the data on booster shots after internal feuding at the Food and Drug Administration spilled into the public this week, with two top vaccine regulators arguing in a review of global data in The Lancet that there is not enough evidence to recommend them.

The drama comes days before a meeting Friday at which the agency’s vaccine advisers, the Vaccines and Related Biological Products Advisory Committee, plan to decide whether to recommend that the FDA approve boosters for people who received the Pfizer vaccine.

“The timing [of the study] couldn’t be any more exquisite in terms of making a statement,” said Monica Gandhi, a professor of medicine at University of California, San Francisco who added that the review provides an unequivocal case that boosters are premature. “I doubt that it will go unnoticed.”

Meanwhile, preliminary data collected by the Centers for Disease Control and Prevention has not yet indicated a decline in effectiveness when it comes to severe disease and hospitalization, leading to anonymous accusations by White House officials in the press that the agency is withholding data.

Experts are eager to see results of the FDA’s independent analysis of data submitted by Pfizer in support of third shots. That analysis is expected to be released Wednesday, before the FDA’s vaccine advisers convene.

A separate study analyzing data on Israel’s booster rollout is also expected to be published this week in the peer-reviewed New England Journal of Medicine.

A U.S. booster policy would consume millions of vaccines while all but the wealthiest countries do not have enough first shots. It would violate the World Health Organization’s call for a moratorium on extra doses for vaccinated people.

The mass clinics that marked the early vaccination campaign have been ratcheted down, and because of the delta surge, testing hubs can’t be transformed into vaccination clinics in the way they were last winter, said Adriane Casalotti, an advocate for the National Association of County and City Health Officials.

If all 6,000 people who were vaccinated at a stadium clinic tried to get a booster exactly eight months later, it would overwhelm public health departments, she said.

“In some county clinics, there is a really finite number of vaccinators. If the staff needed to administer third doses subtracts from the staff available to do outreach, it keeps some people from getting their first vaccinations,” said John Grabenstein, a vaccinologist who works with the Immunization Action Coalition.

While a million or more people have received a booster shot already, even before the government authorized them, a national booster campaign would require far more significant resources, according to former CDC official Glen Nowak, an expert in public health communication at the University of Georgia.

Figuring out how to make sure booster shots are free and ensuring access for people without transportation or without health coverage are potential bottlenecks.

Additionally, the Federal Emergency Management Agency, which was central to the early vaccination campaign, has been stretched thin for months amid hurricane season.

At the moment, many experts argue that the evidence for boosters is shaky.

The Lancet review of 93 studies co-authored by two top FDA vaccine regulators — Marion Gruber, director of the FDA’s Office of Vaccines Research and Review, and Phil Krause, the office’s deputy director — pointed to enduring vaccine efficacy and highlighted some randomness in the data from Israel that has been released so far.

“Reported effectiveness against severe disease in Israel was lower among people vaccinated either in January or April than in those vaccinated in February or March, exemplifying the difficulty of interpreting such data,” they wrote in the article, which was co-authored with top global health officials at the WHO.

Gruber and Krause recently announced they would leave the agency later this year, reportedly in response to the president’s push on boosters.

“To date, none of these studies has provided credible evidence of substantially declining protection against severe disease, even when there appear to be declines over time in vaccine efficacy against symptomatic disease,” they wrote.

They argue shots could make a bigger impact abroad.

It’s not clear whether the FDA’s vaccine advisers will consider the questions raised by the WHO and these FDA officials. Gruber and Krause have typically been on hand to answer questions and offer input during prior advisory group meetings on COVID-19 vaccines.

Archana Chatterjee, a member of the VRBPAC and dean of Chicago Medical School, said in a brief email that she was not sure about the scope of the committee’s discussions and whether they would include The Lancet article or the issue of global supply.

“I would like to review the briefing documents and hear the presentations and discussions before making up my mind,” she said.

Two members of the VRBPAC declined to comment, and six did not respond to requests for comment. VRBPAC member Michael Kurilla, director of the National Institutes of Health’s National Center for Advancing Translational Sciences, said he was prevented from commenting by the NIH press office.

“It’s not really the role of the VRBPAC to consider the global health implications, though of course that is a critical factor in any booster policy,” global health expert Aaron Richterman, an infectious disease fellow at the Hospital of the University of Pennsylvania, said in an email. “The FDA needs to address the safety and efficacy piece, and my major concern is that efficacy has not at all been convincingly demonstrated.”

The CDC is still collecting data on vaccine efficacy through cohort studies of front-line essential workers and health care providers.

CDC Director Rochelle Walensky acknowledged at an industry conference Tuesday that those studies have not shown a decline in efficacy against severe disease or hospitalization yet.

“People weren’t getting that particularly sick yet, but … that may foreshadow that we may be seeing this soon with regard to hospitalizations and severe disease,” Walensky said Tuesday at a conference hosted by the Research!America advocacy group.

While prior CDC presentations had indicated the results of its vaccine effectiveness studies would not publish until the fall, Walensky said she pressured researchers to publish readouts every couple of weeks.

And yet the pace of data collection by CDC has reportedly frustrated Biden administration officials eager to begin boosting. Some White House officials retaliated by allegedly casting the agency as the weakest link of the COVID-19 response in anonymous interviews with Politico on Monday.

Walensky said at the conference she was optimistic about the White House’s timeline for boosters.

Still, the debate indicates U.S. booster policy is going to be contentious.

“It’s quite dramatic to have this degree of public dissent,” said Gandhi.