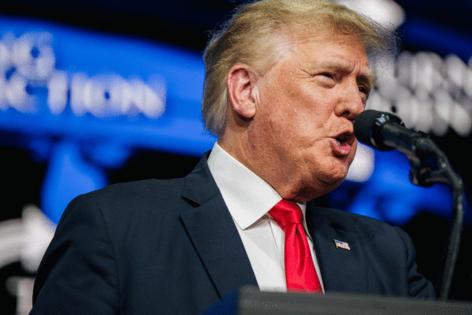 WASHINGTON — Former President Donald Trump mostly held his tongue on the California Gov. Gavin Newsom’s recall election, but he had a last-minute complaint.

The former president said the election was “probably rigged” in an interview on conservative television news outlet Newsmax last week and added that Democrats were good at rigging elections that used mail-in ballots.

Trump doubled down on those claims the day before the recall election — and again on the day of — saying, “it all doesn’t matter because the California Election is totally Rigged” in a memo released by his “Save America PAC” on Tuesday.

California has been using mail-in ballots for years, relying on them more during the coronavirus pandemic, without evidence of widespread voter fraud.

Californians have not elected a Republican in a statewide election since 2006, when former Gov. Arnold Schwarzenegger won reelection. Now, nearly half of the state’s 22 million voters are registered Democrats. Less than a quarter are Republicans. The rest either decline to state a party preference, 23.3%, or are members of another party, 6.2%.

Trump has largely avoided the California recall election until now for two reasons, said analysts: He doesn’t like being associated with losses and he’s more focused on regaining power in Washington.

“Trump doesn’t like losers, and the recall campaign is a loser,” said John Pitney, professor of American politics at Claremont McKenna College.

So far in the 2022 election cycle, Trump has endorsed 32 candidates, according to Ballotpedia. He also endorsed Glenn Youngkin, the Republican nominee for governor in Virginia’s November election.