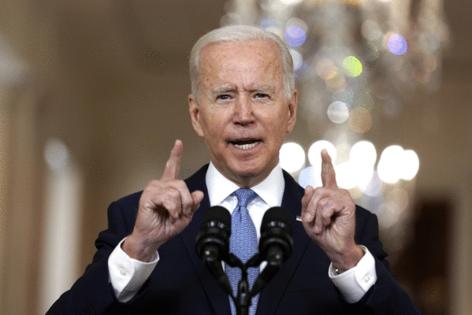 Growing up in the 1960s, I was introduced to “Bizarro World” by DC Comics. Bizarro World was featured in comic books (now graciously re-named “graphic novels”) as a planet where everything and everybody is inverted.

For example, on Bizarro World (otherwise known as Htrae — "Earth" spelled backward), bonds are marketed as “guaranteed to lose money.” Bizarro Aquaman can’t swim. Halloween trick-or-treaters give fruit to the houses they visit. And so on.

By the same token, President Joe Biden’s speech on the Afghanistan withdrawal made perfect sense — but only if it had been delivered from Bizarro World.

Telegraphing from the start that this would be an otherworldly experience, Biden declared the withdrawal mission an “extraordinary success.” Only if you invert all standards by which we measure success could this be so. What about stranding hundreds of Americans who wanted to leave, abandoning thousands of Afghans holding special immigrant visas, allowing billions of dollars of equipment to fall into the hands of the Taliban, watching a country descend into the swirling maelstrom of terrorism, and the death and wounding of hundreds of friendlies resembles success?

Biden went on to claim that the U.S. was “ready when the Afghan security forces … did not hold on as long as anyone expected.” Really? That is what “ready” looks like? So what does “unready” look like? But remember, this is Bizarro World, where everything is weirdly inverted. So OK, yes, “ready,” got it.

Apparently, the Bizarro World standard for success for overseas rescues of Americans is 90 percent. Proudly noting that “90 percent of Americans who wanted to leave were able to leave,” Biden was short on details how the remaining 10 percent would get home. When we speak of saving overseas Americans, when has 90 percent ever been acceptable? The military has a simple code: Don’t leave comrades behind. That’s an easy standard to remember.

Biden went on to declare, “Leaving Aug. 31 is not due to an arbitrary deadline.” Three months ago, Aug. 31 was nowhere to be found on anyone’s lips. Overnight it became the defining feature of the withdrawal. No one claims the date came anywhere except from the White House. If that is not arbitrary, what is? But in the inverted world of the Bizarro White House, Aug. 31 was anything but arbitrary.

When Biden stated: “So we were left with a simple decision: Either follow through on the commitment made by the last administration and leave Afghanistan, or say we weren’t leaving and commit another tens of thousands more troops. Going back to war.” Rational observers might well ask: What about sticking with the obvious status quo of 2,500 troops who were keeping a lid on things in Afghanistan? Why were there only two choices?

Biden rhetorically asked, “Couldn’t this have been done in a more orderly manner?” He then answered his own question: “I respectfully disagree.” So the mess Americans saw when they watched the Afghanistan withdrawal was the best we could expect? Mobs of people, individuals falling from planes, stranded Americans? That was the most orderly withdrawal we could hope for? The strongest country in the world? How is there any way to make sense of that statement, other than to suspend reality?

There were many other indications that this speech sought to flip reality on its head.

Maybe the truest sign that reality had departed the White House was this: “We’ll continue to speak out for the basic rights of the Afghan people, especially women and girls, as we speak out for women and girls all around the globe.” Take heart, women; America plans multiple speeches from the State Department on women’s rights.

But will the Taliban be listening?

Reporting live from Bizarro World, that’s all for tonight.