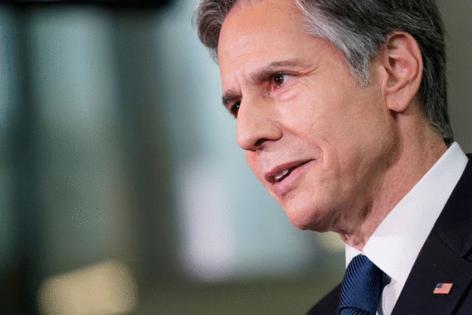 The top U.S. diplomat testified in the administration’s first public congressional hearing about the chaotic end of the combat mission in Afghanistan, America’s longest war.

“The evacuation was an extraordinary effort — under the most difficult conditions imaginable — by our diplomats, military and intelligence professionals,” Blinken testified to the House Committee on Foreign Affairs, his first of two days on Capitol Hill. “They worked around the clock to get American citizens, Afghans who helped us, citizens of our allies and partners, and at-risk Afghans on planes, out of the country, and off to the United States or transit locations.”

But vocal critics in Congress and veteran groups have attacked the State Department and other government entities for acting too slowly to rescue Afghans who worked alongside the U.S. Army and diplomatic missions. Such Afghans face potential injury and death at the hands of Afghanistan’s new Taliban government.

Rep. Michael McCaul of Texas, the ranking Republican on the committee, said the withdrawal was “an unmitigated disaster of epic proportions.”

The administration “abandoned Americans behind enemy lines. I can summarize that in one word: betrayal,” McCaul said.

Some members of Congress, like McCaul, are furious at the small number of U.S. citizens who were not airlifted out of Afghanistan before it fell to the Taliban. The State Department has continued to help U.S. citizens get out of the country, its officials have said, noting that diplomats in the months before the Taliban takeover urged Americans to leave Afghanistan. And some U.S. passport holders are dual nationals who have chosen to remain in Afghanistan.

Blinken argued that the Biden administration’s hands were tied in the drawdown from Afghanistan because of former President Donald Trump’s controversial 2020 agreement with the Taliban to pull out troops by May 1.

The talks leading to that agreement excluded the U.S.-backed Afghan government and by most accounts left it demoralized while providing little in the way of concrete follow-up steps. Trump’s agreement also forced the Afghan government to release several thousand Taliban prisoners.