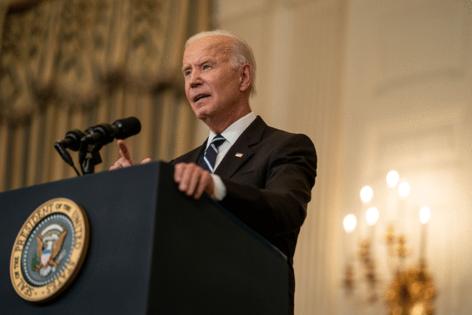 WASHINGTON — The Biden White House would like its fellow Democrats to believe President Joe Biden has as much negotiating leverage on a massive domestic spending measure as he did when Congress left town a few weeks ago.

That contention is, to borrow one of the president’s favorite lines, malarkey.

A reporter asked Biden last week how he intends to pass what could be a $3.5 trillion reconciliation package — loaded with many pricey items — with microscopic majorities in the House and Senate. He replied with a laugh: “Is the sun going to come out tomorrow?”

It did, Mr. President. But what does the flaming orb cresting the treeline outside my window have to do with trillions in new spending that could turn off moderate voters and help hand the House and Senate back to Republicans? We’ll likely never know. After all, “Scranton Joe” riddles are as difficult to decipher as Donald Trump’s old tweets.

We know such optimistic outlooks from the Oval Office give still-recovering Democrats solace after four years of Trump’s insults and threats. We also know word puzzles alone do not cut sweeping spending deals.

Outside of a big tax cut package, Republicans during the Trump era never found a way to craft major legislation for conservatives like Ohio Rep. Jim Jordan and members from the party’s ever-shrinking moderate wing, like Alaska Sen. Lisa Murkowski. Democrats soon will find out whether they can do so for progressives like New York Rep. Alexandria Ocasio-Cortez and moderates like West Virginia Sen. Joe Manchin III.

What voters in the Bronx and Queens tell Ocasio-Cortez they want is different from what Manchin hears in Huntington and Martinsburg. Much different.

The West Virginian seems to relish his role as Democrats’ must-have vote. Oddly, there are reasons to question whether the White House takes him for granted.

“Joe, at the end, has always been there. He’s always been with me. I think we can work something out,” Biden also said last week, when asked about Manchin.

WASHINGTON — House Democrats are set to propose raising the corporate tax rate to 26.5%, people familiar with the matter said, among other plans that fall short of President Joe Biden’s ambitions in a bid to help ...Read More