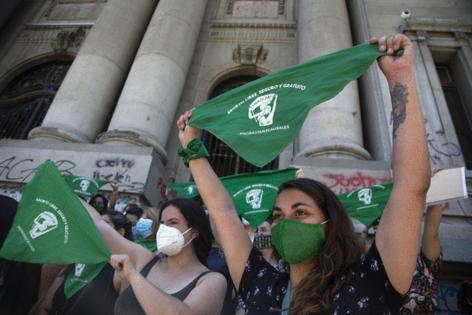 MEXICO CITY — A historic ruling by Mexico’s Supreme Court last week is the latest in a series of victories for abortion rights advocates in Latin America, a largely Roman Catholic region that has long had some of the world’s most restrictive laws against the procedure.

The vast majority of women in the region still lack access to legal abortions, but restrictions have now been lifted or relaxed over the last 15 years in at least half a dozen countries.

“This is a long fight, it takes a lot of time and work to change minds and perceptions,” said Cristina Rosero, legal advisor for Latin America and the Caribbean for the Center for Reproductive Rights, an abortion rights group based in New York. “But I think we are reaching a turning point.”

The shift in Latin America comes in contrast to the United States, where several conservative states have passed antiabortion laws in recent months, and the Supreme Court seems poised to at least trim the constitutional protection the procedures currently have. Both in the U.S. and in Latin America, powerful opponents of legalization include the Roman Catholic Church, evangelical Christian denominations and conservative politicians.

But advocates for abortion rights have been buoyed by a wave of feminist activism that has swept across Latin America and the Caribbean in recent years, shaking historically male-dominated power structures.

Through political pressure campaigns organized on social media and sometimes violent street protests, the movement has succeeded in bringing reproductive rights — along with the issues of workplace equality, female political representation and crimes against women — to the forefront of the political agenda.

Marchers from Chile to Mexico demanding equality for women now brandish the green handkerchiefs that abortion rights demonstrators in Argentina have waved as symbols of their signature movement.

In January, Argentina formally legalized abortion in the first 14 weeks of pregnancy, following Senate passage of a law allowing the procedure.

Argentine lawmakers acted despite an appeal from Pope Francis — their revered countryman — to reject expansion of abortion rights.