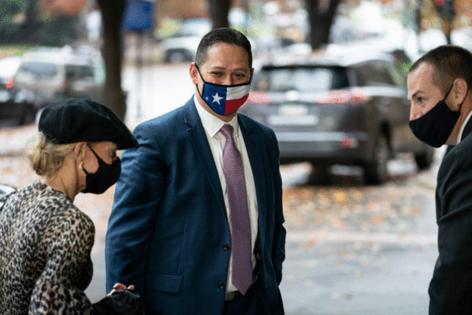 He was watching closely in July as Blue Origin co-founder Jeff Bezos shot himself and three others to the edge of the atmosphere from a spaceport in the West Texas desert.

Gonzales is new to Congress, but not entirely. While serving in the Navy, he came to Capitol Hill in 2016 as a fellow, placed through the Defense Department and assigned to the office of Florida GOP Sen. Marco Rubio. He remembers it as a legislative trial by fire, complete with Red Bull and Cuban coffee.

Gonzales spoke with CQ Roll Call about his memories from those days (like playing football with Rubio in the halls) and why the Hill needs more staffers with military experience.

Q: Tell me about the Defense fellows program.

A: My year was the first time the Navy had opened up the legislative fellowship to enlisted sailors. Because I wasn’t going to be an admiral some day, I thought they were going to stick me in one of these nonvoting offices or something like that. But I was excited to land in Marco’s office. I was stationed in Pensacola at the time, and I really believe in him and his message. I had helped out on his campaign a little bit, but it was by fate that I got that office.

Q: How did your routine change from one day being a Navy cryptologist to the next walking the halls on Capitol Hill?

A: A lot of people don’t realize I was a master chief, so the highest enlisted rank. In the Navy world, nobody messes with the master chief. I mean, you run the show. And then here I go to being a staffer on the Hill, where nobody even cares you exist. So it was an adjustment period. But honestly, I was so excited. I had wanted to be part of the legislative process ever since I was a kid.

Q: Was there ever a time you used your cryptology skills as a fellow?