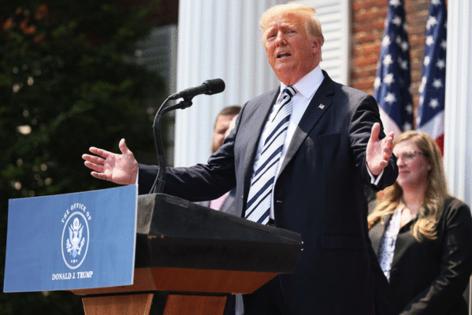 Former President Donald Trump’s political operation raised $56.8 million from online donors in the first half of the year, but he didn’t contribute any to federal candidates he’s supporting for the midterm elections during that period.

Trump’s committees will file mid-year reports with the FEC Saturday. The disclosures will provide the first detailed look at where Trump’s political operation has spent its money through June 30 and for what purposes. Any money spent after that date will not be disclosed until the next filings are due Jan. 1, 2022.

Save America, which ended 2020 with more than $31 million in the bank, can donate up to $5,000 to congressional campaigns per election. Through June 30, none of the 19 congressional candidates Trump has endorsed reported receiving a donation from it. Trump’s campaign committee, since renamed the Make America Great Again PAC, didn’t contribute to them either, FEC filings show.

But Trump opened his coffers in July to at least one candidate. Alabama Rep. Mo Brooks, who helped lead the challenge of legally certified Electoral College votes and is Trump’s candidate in 2022 to replace retiring Sen. Richard Shelby, issued a press release announcing that Trump’s PAC gave him the maximum contribution.

Brooks may need Trump’s help. Katie Britt, a former chief of staff for Shelby who’s now running for the seat, raised $2.2 million in the second quarter compared to $824,056 for Brooks.

The former president is encouraging his supporters to back candidates who have been loyal to him and to oppose GOP incumbents who voted to impeach or convict him for his role on Jan. 6, when a mob of his supporters stormed the U.S. Capitol to stop the counting of Electoral College votes for President Joe Biden.

Under federal law, Trump faces fewer restrictions on how he can use money raised by Save America than he would for money raised for a campaign, which can’t be converted to personal use. PAC funds face no such limits.

Trump could use the money to fund the various lawsuits he’s pursuing. Save America staged a press conference with Trump on July 7 at his Trump National Golf Club Bedminster in New Jersey to announce he’s suing Facebook Inc., Twitter Inc., Alphabet Inc.’s Google and their chief executives in his battle to regain access to the social media sites that banned him. The lawsuits seek court orders to restore his accounts, along with punitive damages.