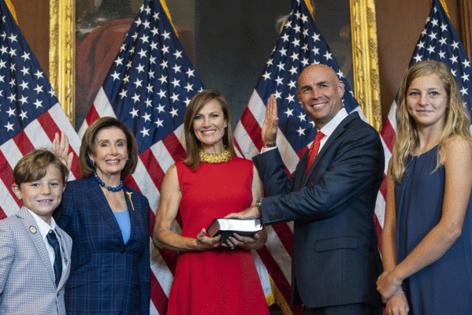 Republican candidates backed by Trump are locked in crowded primary races against undeterred opponents. Some are raising less money than their competitors. And just this week one lost an intraparty battle in Texas.

Trump has retained a firm grip on the GOP base since exiting office, and his endorsement remains extremely valuable within the party. But at the same time, he has not yet been able to fully transfer his popularity to Republican candidates running for office in the early stages of the election cycle, raising questions about the level of influence the former president will have heading into the 2022 midterms.

“At this moment in time, he still dominates the party. You can’t deny that,” said former Republican consultant Tucker Martin. “But you can see around the edges that the tide’s beginning to recede.”

Sarah Longwell, a former GOP operative who runs the anti-Trump Republican Accountability Project, said she recently concluded a series of focus groups with Trump voters from around the country. Longwell said that most wanted to see him run for president again in 2024, but when she asked about Trump’s endorsement of other Republican candidates in upcoming elections, she received a “mixed reaction.”

Longwell said that the most pro-Trump Republicans, who accounted for about half of the focus group participants, were likely to say that the former president’s endorsement would matter to them. But for the other half, identified by Longwell as more traditional Republicans who still supported Trump, his endorsement wouldn’t affect their vote as much.

“It’s some place between, Trump has the Midas touch and you automatically win and his endorsement doesn’t matter,” Longwell said. “It is not a foregone conclusion that a Trump endorsement will guarantee victory.”

The starkest example of the limits of Trump’s endorsement came this week in a special runoff election for a U.S. House seat in Texas between two Republicans. Conservative activist Susan Wright lost the race on Tuesday in the state’s 6th congressional district to GOP state Rep. Jake Ellzey by nearly seven points after Trump held a tele-town hall, recorded a robocall and ran ads through his super PAC on her behalf.

Trump blamed the loss on Democrats, who were eligible to vote in the election, saying in an interview with Axios that they turned out to oppose his preferred candidate.

While the Texas special election in the summer of an off-year was unique, some political analysts on the right pointed to the race’s low voter turnout as a sign that Trump was unable to motivate his core supporters to back Wright.

“I don’t think he’s strong enough to elevate someone who would have lost without him,” said Henry Olsen, a senior fellow at the conservative Ethics and Public Policy Center. “It’s not that he’s going away and fading into irrelevance. But I don’t think he is viewed as strongly as when he was in office.”

Republicans say that Wright benefited from Trump’s endorsement ahead of the May 1 all-party primary, helping her to stand out in a 23-candidate field. But they add that Trump’s support would have carried greater weight in the head-to-head July 27 election if he would have campaigned more aggressively on Wright’s behalf.

For instance, Trump held rallies in Ohio and Florida and spoke at the North Carolina Republican Party convention this year, events where he plugged some of his favored candidates.

“This result shows Trump must be all-in with endorsements. He didn’t raise money or show up in the district,” said Matt Mackowiak, a Texas-based Republican strategist. “A half-hearted endorsement can be overcome.”

Some Republicans also argue that because GOP candidates running in open primaries this election cycle are likely to be staunch supporters of Trump, his endorsement may not end up serving as a deciding factor for voters.

In an interview with a local Texas radio station after the election, Ellzey said the notion that the result was a rebuke of Trump was “nonsense.”

“The president is still exceptionally popular in this district,” Ellzey said.

Even before the Texas election results came in, there were signs that Trump’s support didn’t automatically lead to campaign success.

Republican candidates running for open U.S. Senate seats in Alabama and North Carolina have not been scared off by Trump’s early endorsements, with both races drawing crowded primary fields. Trump’s preferred candidates in those contests — Alabama Rep. Mo Brooks and North Carolina Rep. Ted Budd — raised less campaign cash than one of their opponents in the second quarter of the year.

And Alaska Sen. Lisa Murkowski, the only one of seven Republican senators who voted to convict Trump in the impeachment trial earlier this year and is up for re-election in 2022, outraised Trump-backed Republican Kelly Tshibaka.

Similarly, the former president’s opposition hasn’t ensured defeat. Of the 10 House Republicans who voted to impeach Trump, South Carolina Rep. Tom Rice was the only one who was outraised by a primary challenger in the last fundraising period.

Trump did notch a victory earlier in the year by endorsing Republican Julia Letlow, who went on to win the special election in Louisiana’s 5th congressional district.

He will face his next test on Tuesday in Ohio’s 15th congressional district, where he endorsed former energy lobbyist Mike Carey in the 11-candidate GOP primary. A Trump-aligned super PAC started airing $350,000 worth of ads on Carey’s behalf this week.

As in Texas, Republicans say they anticipate a low-turnout and unpredictable election in Ohio. Trump released a statement this week reminding voters that Carey “is the only one who has my Endorsement.”

Doug Preisse, the former chairman of the Franklin County Republican Party in Ohio, said Carey has embraced the endorsement “wholeheartedly” throughout the campaign.

“It is an interesting test case that a lot of people are watching closely,” Preisse said.