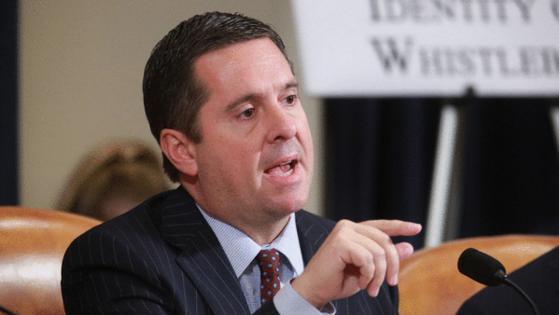 The campaign committee for Nunes, R-Calif., who became a national political figure after aligning himself with former President Donald Trump, had more than $11.5 million on hand as of June 30.

That’s the third most of any House member, behind California Democratic Reps. Adam Schiff and Katie Porter — according to OpenSecrets, a nonpartisan campaign finance watchdog.

Between April and June, Nunes raised $2.67 million through four different fundraising committees he controls. Nunes and his campaign did not respond to requests for comment.

Nunes has two sources of influence propelling his fundraising: He is close to Trump and Trump supporters, and he’s in line to become chairman of the powerful House Ways and Means Committee if Republicans win a majority next year.

While corporations generally are shying away from giving to Republicans since the Jan. 6 riot at the U.S. Capitol, Nunes received money from political action committees representing insurance agents, accountants, Cigna, the National Federation of Independent Business, Koch Industries and others.

Unlike many congressional representatives, Nunes also draws from a national network of small dollar donors. In 2019-2020, more than half of his donations were less than $200 each, according to OpenSecrets.

Nunes built that constituency during the Trump administration. He gained a following among Trump supporters during special counsel Robert Mueller III’s investigation into Russia’s interference in the 2016 election and later during Trump’s impeachment over the former president’s attempt to pressure Ukraine into investigating President Joe Biden and his son.

Nunes derided both investigations as a “hoax.” Trump as he left office called Nunes a “hero” and awarded Nunes the Medal of Freedom.

This name recognition can work in two ways, said Dan Schnur, a politics professor at the University of Southern California who worked as a communications specialist for the presidential campaigns of Republicans John McCain, George H.W. Bush and Ronald Reagan.

“On one hand, he made enemies in all 50 states; on the other hand, he put together tremendous national support,” Schnur said of Nunes in a telephone interview.

Nunes’ ties to Trump have meant tough elections before. In 2020, Nunes defeated Democratic challenger Phil Arballo with 54.2% of the vote. Arballo, a small-business owner, is running again in 2022.

In 2018, Nunes beat Democratic opponent Andrew Janz with about 52.7% of the vote, the closest race of his career since Nunes took office in 2003. In 2016, Nunes defeated his opponent by more than 35 percentage points.

Nunes’ campaign filings also show the congressman is trying to build goodwill and support from fellow Republicans by giving generously. He has given the National Republican Congressional Committee, the GOP’s House campaign arm, $698,000 this year. And he’s made contributions to 70 fellow Republicans from his NewPAC fund.

This could help his bid to be selected as chairman of the House Ways and Means Committee if Republicans win control of the House next year.

The committee is arguably one of the two most influential House committees alongside the funding-overseeing Appropriations Committee. Ways and Means controls legislation involving taxes, Social Security, trade, health care, insurance, Medicare and more.

In turn, being in line for such a position also draws more money.

“Being a ranking member or committee chair is always a big magnet for donors,” said Andrew Mayersohn, a committee researcher at OpenSecrets.

Even with all the giving, Nunes has been holding onto a lot of cash, shuffling it among his four fundraising committees.

John Pitney, a politics professor at Claremont McKenna College and former deputy director of the Republican National Committee’s research department, said that there are two big reasons Nunes is likely stockpiling: uncertainty over the once-a-decade redistricting underway this year and how his national profile will draw Democratic opponents.

The process of redistricting, or redrawing political boundaries for the areas House members represent, comes up every 10 years after information on where people are residing is collected from the Census. California lost a seat in the House after the 2020 Census determined that fewer people were residing in the state.

“Prospects in 2022 will depend a lot on the shape of the district, which we don’t know yet,” Pitney said. “It should be a little clearer after the recall vote. And if Trump can and decides to run again, that could change support for Nunes.”