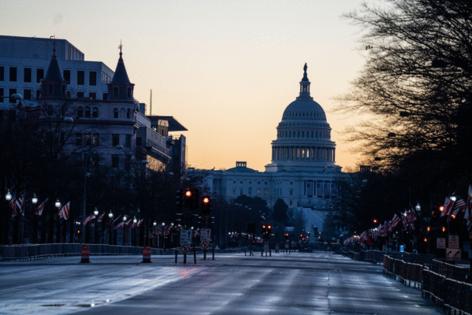 “There are people who stick around for a long time, and people who are here for a short time, and then you see the average tenure at about that three- or four-year mark. So looking at how you hold on to those people is important,” Democratic Rep. Derek Kilmer of Washington, chairman of the Select Committee on the Modernization of Congress, said in an interview Wednesday.

The panel advanced 20 recommendations Thursday, including ones calling on the House to provide ways for staff to get tuition reimbursement for taking university classes and getting certificates. The panel also urged the House to create an office to help interns navigate onboarding and professional development.

“There is value in recruiting and retaining talented people. Because when you do that, you can solve tough problems better and make the institution less reliant on lobbyists,” Kilmer said.

Recommendations, which thematically focused on retention and accessibility, were approved in two blocs. A 15-recommendation bloc was adopted by unanimous consent.

Among the recommendations that weren’t unanimous, drawing fire from Republican Texas Rep. Beth Van Duyne, was the call for the House to expand tuition assistance so staff can go back to school. Another contested topic was stipends for committee interns.

Van Duyne said private and public sector jobs are completely different, adding that lawmakers should be good stewards of taxpayer money and staffers should make sacrifices to take jobs that are a public service.

“I don’t think the two groups should compete,” she said.

But both Kilmer and Modernization Vice Chairman William R. Timmons IV pushed back, arguing that retaining staff is a “rounding error on our budget” and worthwhile despite a growing national debt.

“We have $30 trillion in debt — the future of our country causes me concern,” said Timmons, a South Carolina Republican. “So investing in staff to make sure that we have the bandwidth to engage in all of our important work is a no-brainer.”

Timmons said the topic of staff retention hits close to home. This week he found out one of his senior staff is leaving to go make “more than double” what she’s making now.

Several of the recommendations have a common goal — to centralize resources for staff. In the diffuse workplace that is Congress, policies vary widely from office to office, and new employees sometimes say they feel lost. One recommendation calls for a standard onboarding packet to help staffers find information about health insurance and retirement benefits, while others urge the chief administrative officer to collect demographic data and provide access to hiring software.

Making the Capitol more accessible is another priority, since the complex can be a maze of hallways, stairways and heavy doors. The panel urged the House to add more automatic doors and maintain accessible websites.

For the public, the committee recommended the creation of a pick-up and drop-off zone near an entrance that is compliant with the Americans with Disabilities Act, plus clear expectations for security screenings.

Thursday’s recommendations represent the first advanced by the panel since the Congress began at the beginning of the year. By the end of the last Congress, the Modernization Committee had made 97 recommendations, and the House passed a resolution that made progress on implementing 29 of them. Several have already been folded into House rules and the fiscal 2022 Legislative Branch spending bill. Others were implemented outright, like making the House Office of Diversity and Inclusion permanent and allowing committees to submit electronic reports and members to add their names to bills digitally.

The bipartisan committee was established in January 2019 and charged with making Congress more transparent, efficient and effective.

With the committee set to expire in 18 months, both Kilmer and Timmons said they’re operating as if the panel won’t be renewed. The plan is to make the committee as productive as it can be, and seek to work with other partners within the House to continue the work they’ve started after the panel disbands.

Timmons said in an interview that he looks forward to some of the other issues the committee plans to tackle, like better managing members’ time by creating new ways to schedule hearings or take votes.

He said the recommendations made in the last Congress were much needed, and this Congress finding agreement might get even tougher.

“This is going to be hard, but it is critically important that we do this work,” he said. “And I think we’ve got the right people in place to get it done.”