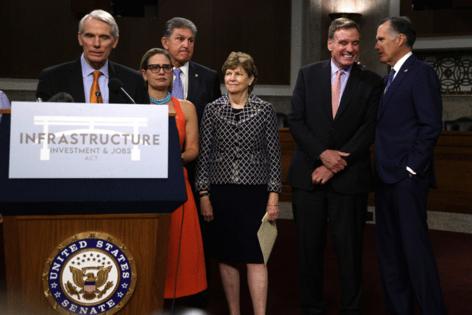 “He’s giving Democrats everything they want and getting nothing in return,” Trump said. “No deal is better than a bad deal.”

The former president reupped his attack on the GOP Senate leader, whom he derided as a spineless RINO, an acronym for Republican In Name Only.

The bipartisan infrastructure deal was negotiated by a group of 10 senators, including five moderate Republicans.

They needed 60 votes in all, including at least 10 Republicans, to overcome a filibuster threat in the evenly divided Senate.

After months of wrangling, the bill won better-than-expected support among Republicans, including several hard-line Trump supporters who may have been lured by the promise of big bucks to fix crumbling roads and bridges in their states.

Trump, who spawned late-night jokes with his less-than-laser-sharp focus on #InfrastructureWeek during his White House term, wasn’t impressed.

“It is a loser for the USA, a terrible deal, and makes the Republicans look weak, foolish, and dumb,” Trump said.

Trump warned the GOP to stand firm against all of Biden’s proposals, or risk his wrath whenever they face voters next.

“If this deal happens, lots of primaries will be coming your way!” Trump warned.