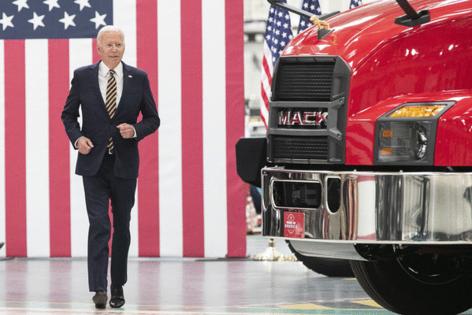 MACUNGIE TOWNSHIP, Pa. — President Joe Biden came here Wednesday to a sprawling Mack truck plant in the Lehigh Valley to unveil a plan to pump more federal dollars into American products, like the red, white and blue trucks lined up beside his podium.

Biden’s proposal is to boost American manufacturing by upping the threshold for what products qualify as American “enough” for the federal government to buy.

Currently, the federal government has to spend tax dollars on products made in the U.S., but that includes products built with just 55% American components. The new proposal would gradually ramp that up to 75%. Companies would also have to provide proof their products are American-made rather than just sign off that they’ve met the threshold, Biden said.

“We got a new sheriff in town,” the president said, jacketless, after touring the plant, which builds the cabs, frames and engines for every Mack truck in North America. “Substantial is gonna mean substantial.”

The increase would be gradual, starting immediately at 60% and rising to 75% by 2029 to allow businesses time to adjust and boost use of American-made parts.

The government spends about $600 billion a year, about half to buy products. That includes about 1,500 Mack trucks used by military and civilian agencies.

The visit came as the Senate appeared to reach a bipartisan agreement on Biden’s infrastructure bill, something he learned about while touring the building. He seemed particularly upbeat, jogging to the podium for the speech, removing his jacket and joking at the top of his remarks that he was only there to drive a truck.

Ahead of his visit Republicans said Biden and his policies have hurt manufacturers, blaming the president for rising inflation, businesses’ struggles to find workers, and his decision on his first day in office to block the Keystone XL oil pipeline.

“Every manufacturer needs energy, usually in massive volume, and energy production means jobs,” said Bernadette Comfort, vice chair of the Pennsylvania Republican Party. But Biden’s “anti-energy” policies “are a problem for manufacturers who need reliable and affordable energy, she said, and also for families” that rely on the jobs in those industries.