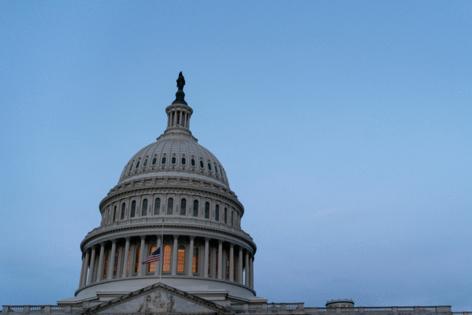 WASHINGTON — A $2.1 billion emergency spending bill to bolster Capitol Hill security, reimburse the National Guard and relocate Afghans who helped the U.S. government during two decades of war in that country stalled Wednesday after several Senate Republicans put holds on the bill.

Senate Appropriations ranking member Richard C. Shelby, R-Ala., said as many as seven lawmakers have objections to the $1.1 billion the legislation would provide to help relocate Afghans to ensure their safety as U.S. troops withdraw.

“I believe we have an obligation to the Afghan people who are our allies, who helped us. We know what’s going to happen to a lot of those people,” Shelby said, adding that it would be “shameful” not to help those Afghans now.

Sens. Marsha Blackburn of Tennessee, Mike Braun of Indiana, Tom Cotton of Arkansas, Mike Lee of Utah, Roger Marshall of Kansas and Tommy Tuberville of Alabama at one point were among those objecting, according to a source familiar with the holds, who was not authorized to speak publicly.

Lee and Marshall later told reporters they weren’t part of the holdup. Rand Paul, R-Ky., who typically seeks to slow down foreign aid spending bills, said he was not one of the objectors.

Even if there’s just one objection, it means Senate leaders will have to force action on the measure through procedural steps, such as filing cloture.

The bill negotiated by Senate Appropriations panel leaders has broad bipartisan support and is expected to ultimately pass. Senate Minority Leader Mitch McConnell gave the measure his endorsement on the floor Wednesday.

“I’m sure neither side finds the compromise perfect, but I believe that both sides should and will agree it is absolutely necessary,” the Kentucky Republican said.

Senate Majority Leader Charles E. Schumer, D-N.Y., said he expects the chamber to “swiftly” approve the emergency spending bill, though he declined to give a specific timeline. And the cloture process could drag out a final vote by a few days and put in danger the House’s timetable to take up the measure before adjourning for its summer recess at the end of this week.

Speaker Nancy Pelosi, D-Calif., didn’t seem overly enthusiastic about the Senate package, which nearly cuts in half the resources for the Capitol complex and federal agencies approved in a $1.9 billion House-passed bill. The House bill has none of the money for Afghan refugees that the Senate measure does.

“It’s not what we sent. It’s certainly not what we need, but it is a good step forward,” Pelosi told reporters Wednesday. “So we look forward to seeing what they do and hopefully taking up that legislation this week,” she said, adding there could be more money to come in a separate bill: “It doesn’t mean that we’re finished.”

Shelby and Senate Appropriations Chairman Patrick J. Leahy, D-Vt., reached agreement Tuesday on the $2.1 billion emergency spending measure after months of stalemate between the two parties on the issue.

The package would provide $521 million to reimburse the National Guard for the cost of activating troops from throughout the country to protect the Capitol for months following the Jan. 6 attack.

The U.S. Capitol Police would receive $70 million for salaries, equipment and other expenses related to the insurrection by pro-Trump rioters. And the Architect of the Capitol would get $300 million to bolster windows and doors throughout the complex and to install new security cameras.

The bill would also appropriate $42.1 million to the Architect of the Capitol, the Sergeant at Arms and the Capitol Police to assist the agencies with COVID-19.