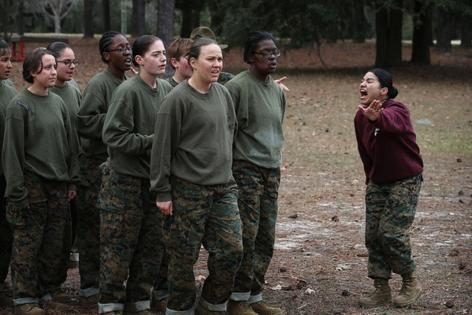 WASHINGTON — Conservatives are expressing outrage about a pending Senate National Defense Authorization Act that would require women to register for the draft, and two defense hawks opposed the Pentagon bill in the Armed Services Committee over the issue.

The Senate’s NDAA, which the committee approved Wednesday, contains an amendment by the panel’s chairman, Jack Reed of Rhode Island, that would require women to sign up with Selective Service, just as men do between the ages of 18 and 25. If enacted, women could be drafted into military service in the event of a national emergency, though there is no prospect of that on the horizon, and no American has been drafted in nearly half a century.

If the bill became law in its present form, women would have to start registering one year after enactment of the NDAA, a knowledgeable Senate aide told CQ Roll Call.

But while most of the committee’s Republicans voted for the amendment, five voted no, senators and aides disclosed. And two of them, who normally are strong advocates for supporting the military — Tom Cotton of Arkansas and Josh Hawley of Missouri — voted against the Pentagon authorization bill because of their concerns about the draft issue, their aides revealed Friday.

The committee divulged in a statement Thursday that its final vote on approval of the NDAA was 23-3. That vote count was the only tally from the markup that has been made public, even though numerous amendments were considered. Moreover, the panel has not yet officially disclosed which way any individual senators voted in the closed-door proceeding.

But Cotton tweeted Friday his opposition to women registering with the Selective Service.

“Our military has welcomed women for decades and are stronger for it,” Cotton wrote. “But America’s daughters shouldn’t be drafted against their will. I opposed this amendment in committee, and I’ll work to remove it before the defense bill passes.”

Hawley, too, tweeted about the issue Friday.

“I voted against forcing women to enter the draft, and here’s why,” he wrote. “American women have heroically served in and alongside our fighting forces since our nation’s founding. It’s one thing to allow American women to choose this service, but it’s quite another to force it upon our daughters, sisters and wives. Missourians feel strongly that compelling women to fight our wars is wrong and so do I.”

In the Wednesday vote on approval of the NDAA in the committee, Hawley and Cotton were the only GOP no votes, their aides said.