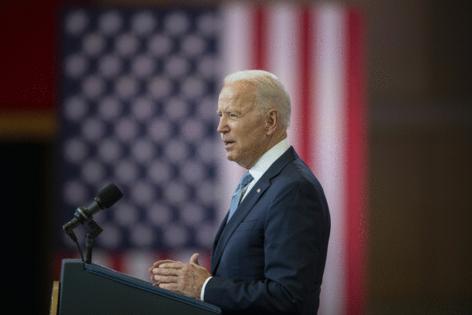 President Joe Biden did not overstate our national crisis the other day when he denounced the current attack on voting rights as “the most un-American thing that any of us can imagine, the most undemocratic, the most unpatriotic … ”

To those strong words, he might have added that voting is also the most UNPROTECTED of the rights that most Americans cherish. Many are unaware of how tenuous it is. The Founders put nothing in the Constitution to sanctify it as one of those unalienable rights for which American independence had been won. They left it to the states to say who could vote.

The Constitution also permitted Congress to adopt its own rules, which is the source of something else Biden left unmentioned: the Senate filibuster. Neither of the bills he urged Congress to pass to protect voting rights has even the slightest chance against Republican Senate Minority Leader Mitch McConnell’s filibuster, which has already prevented debate on one of them.

The filibuster has become a dagger in the heart of our democracy. The Senate rule must be repealed, or at the very least amended to be inapplicable when fundamental rights, such as voting, are at stake. If Biden doesn’t take that on, all his strong words are fated for futility.

You can take a president out of the Senate, but it seems you can’t take the Senate out of a president like Biden, who spent 36 years there. However, he has a vastly greater responsibility now.

As drafted in 1787, the Constitution said that the people would elect the House of Representatives, but it didn’t specify how. Until it was amended in 1913, it had the state legislatures appoint the senators. They still decide how to select presidential electors.

Some legislatures opted for a while to appoint the electors themselves, rather than let the people do it. Some are threatening to do so again if that’s what it would take to elect a Republican president.

At least 14 have already given themselves the power to replace honest election boards with political puppets, and in Georgia and Arizona, they have actually done it. Seventeen states, including Florida, have limited voting access since the 2020 election

With amendments, the Constitution eventually came to establish voting rights in a negative way, by specifying only the reasons why the franchise could not be denied. For being Black or a former slave. For being female. For failing to pay a poll tax. For being only 18, 19 or 20 years old.

But outside those parameters, there’s vast maneuvering room for politicians to make voting difficult and for collaborationist judges like Supreme Court Justice Samuel Alito to help them get away with it.

PERRY, Ga. — For the first time since a pre-runoff visit in January, former President Donald Trump is returning to Georgia to hold a rally for thousands of supporters. And even though Democrats swept those Jan. 5 runoffs...Read More